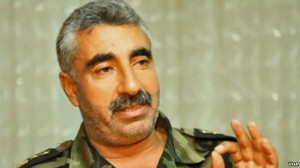 The rebel Free Syrian Army (FSA) has laid out conditions for releasing 48 Iranians who were kidnapped in Damascus this month.

In an interview with VOA’s Persian News Network, Deputy FSA Commander Colonel Malik al-Kurdi said the hostages would be freed if the Iranian government respected the human rights of “its own people” and tried to help end the bloodshed in Syria.

“This is a simple demand which comes from the Syrian people who are suppressed and are being martyred every week,” said al-Kurdi.

The Iranians were kidnapped aboard a bus in Damascus, on August 4, just a few kilometers from a battle between government troops and rebels fighting against Syrian President Bashar al-Assad.

Dispute over identity of hostages

Earlier this month, Iranian Foreign Minister Ali Akbar Salehi said some of those kidnapped are retired members of the Revolutionary Guards and army who traveled to Syria for a pilgrimage.

Colonel al-Kurdi said Syria is at war and no pilgrim has entered the country. He said the FSA had provided “convincing evidence” that the hostages were from the Revolutionary Guards. The rebels say the Iranians were on a “reconnaissance mission.”

He commented from a safe house near the Turkish-Syrian border.

In recent years, hundreds of thousands of Iranians have traveled to Syria to visit the Sayeda Zeinab mosque, a holy shrine in Damascus.

Iran has been a staunch supporter of President Assad during the 17-month anti-government uprising.

On an August 7 visit to Damascus, Iranian national security council secretary Saeed Jalili praised Assad’s government and said Syria was part of the “Axis of Resistance” against foreign opponents.

President Assad is part of the minority Alawite sect, which is related to Shi’ite Islam. Syrian rebels come mainly from the country’s Sunni Muslim majority.

Meanwhile, most Iranians are Shi’ites.

Iran appealed to Turkey and Qatar for help, shortly after the Iranians were kidnapped.

While Iran backs the Syrian government, Turkey and Qatar have shown support for the opposition.