At least 60 killed in suspected massacre in Syria 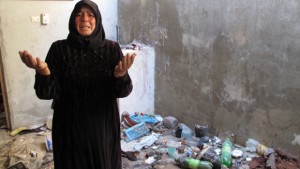 At least 60 charred bodies were found Thursday in a suburb of the Syrian capital of Damascus in what activists described as another massacre committed by government forces.

The bodies, all with their hands tied behind their backs, were found in a landfill in Qatna. Online video showed twisted corpses, some of them still burning.

Hours after the discovery, opposition activists were still trying to find out who the victims were and what happened.

Those slain in Qatna were among an estimated 200 people killed across Syria on Thursday as the daily death toll in the ongoing conflict between opposition fighters and President Bashar Assad’s forces continues to rise.

In the northern city of Aleppo, 70 were reported killed, including 40 people waiting for bread when a rocket fired by a warplane hit a bakery in the rebel-held Qadi Askar neighborhood.

A citywide flour shortage has resulted in bakeries being inundated with customers trying to buy a few loaves of bread, a staple of the Syrian diet. Grisly video said to be from the aftermath of the attack showed a line of bodies crumpled on the blood-soaked ground.

“Their goal is terrorizing the people,” Abu Hashim, an activist in Aleppo, said of the government’s tactics.

Forces loyal to Assad continued to pound many districts of the city. In another neighborhood, Shiar, eight people were killed as they tried to flee intensifying air attacks, Abu Hashim said.

“The situation is very bad; the electricity is cut, the water is cut, and the refugees can’t find a place to flee to,” he said. “Where are the people going to go?”

The accounts of the two attacks could not be independently verified because the Syrian government restricts outside media access to the conflict zones.

As violence grew in Aleppo in recent weeks, residents fled to the suburbs, which seemed safer. But attacks on the rebel-controlled suburbs has increased even as shelling on the city continues.

The Organization of Islamic Cooperation, meanwhile, suspended Syria’s membership in the international body, and the United Nations Security Council voted to end the four-month monitoring mission in Syria because conditions had not been met for it to continue. The mission will formally end Sunday.

But the council agreed to create a liaison office in Damascus to support efforts for a political solution to the conflict and respect for human rights.U.N. Secretary-General Ban Ki-moon said the U.N. cannot stop trying to assist the Syrian people in finding an end to the 17-month conflict.

“I think it is imperative for the United Nations to have a presence in Syria that can work in other areas to support me in utilizing my good offices, in particular, to support the work of the Joint Special Envoy in mediating and facilitating a peaceful resolution to the crisis,” Ban wrote, referring to the efforts of former U.N. chief Kofi Annan, who represented the U.N. and the Arab League in forwarding an unsuccessful peace plan. Annan resigned as special envoy early this month.