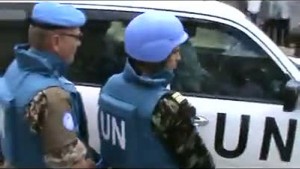 The United Nations called an end to its observer mission in Syria overnight as activists reported more bloodletting in an attack on civilians in the main battleground of Aleppo.

The UN decision was announced as the international community piled the pressure on president Bashar al-Assad’s embattled regime to end 17 months of fighting, which is now threatening to entangle neighbouring Lebanon.

“The conditions to continue UNSMIS were not fulfilled,” France’s UN ambassador Gerard Araud said after a New York meeting on the conflict, referring to the mission whose mandate is due to end at midnight Sunday.

Major powers have long been at odds how to end the increasingly brutal battle for Syria, and the withdrawal of the observers follows the collapse of a peace plan drawn up by outgoing peace envoy Kofi Annan.

The UN’s humanitarian chief Valerie Amos says she is frustrated that Syria will not allow more major international aid groups into the country.

Lady Amos is in Syria to assess the country’s humanitarian needs as the conflict rages on.

She warned that the situation was worsening, with the number of people in need possibly as high as 2.5 million and one million at risk of “destitution”.

Lady Amos said the Syrian regime was refusing to let aid in because they fear it could reach the opposition rebels.

“I was told by the Syrian authorities that they are concerned that aid would reach, in their terms, the people they termed the armed groups and the terrorists, and they do not want to see that happen,” she said.

On the ground, activists reported that Syrian forces shelled a group of people queuing outside a bakery in the eastern Qadi Askar district of Syria’s second city, Aleppo.

The Syrian Observatory for Human Rights said 10 people were killed in the district, and that at least 99 had died in violence across the country on Thursday, most of them civilians.

On Wednesday, around 40 people, including women and children, were killed in a massive air strike on civilians in the rebel bastion of Aazaz, just north of Aleppo, according to rights groups and residents.

Human Rights Watch urged the UN Security Council to impose an arms embargo on Syria after the air strike on Aazaz.

Mohammed Nur, director of the now closed Aazaz media centre, said 40 people were killed – including 30 from one extended family – and 150 people wounded.

“Bashar al-Assad doesn’t care where the bombs land and in any case, his pilots are not that accurate,” he said.

With the violence showing no signs of abating, Russia – which along with China – has blocked three UN resolutions on the crisis, called for world powers to make a joint appeal for the regime and rebels to end the fighting.

“France’s position is clear: we consider Assad to be butchering his own people. He must leave, and the sooner he goes the better,” Mr Fabius said at a refugee camp for Syrians in Jordan, before flying on to Lebanon.

Earlier Thursday, the Organisation for Islamic Cooperation suspended Syria, with its chief Ekmeleddin Ihsanoglu saying: “This [Muslim] world can no longer accept a regime that massacres its people using planes, tanks and heavy artillery.”

The United States and the opposition Syrian National Council welcomed the move, but it was rejected by Syria’s staunch ally Iran and by Damascus, which charged it was the victim of a US-masterminded “conspiracy”.

Mr Assad, whose regime has been hit by a spate of high-level defections and a bomb attack that killed his top security chiefs, insists he is fighting a “terrorist” plot aided by rival Sunni Muslim powers, including Saudi Arabia.

Syrian Foreign Minster Walid Muallem, for his part, accused Arab states of failing to give even one dollar to help the humanitarian situation in his country, and instead sending arms for the rebels.

Stoking fears that the warring could spread, dozens of Syrians were kidnapped in Lebanon on Wednesday – many by an armed Shiite Muslim clan – in retaliation for events across the border.

“This brings us back to the days of the painful war, a page that Lebanese citizens have been trying to turn,” prime minister Najib Mikati said, recalling the dark days of the civil war and the kidnapping of Western hostages.

Saudi Arabia – the regional Sunni powerhouse that is opposed to Mr Assad’s Alawite-led regime – along with at least two other energy-rich Gulf states, ordered their nationals to leave immediately because of threats.

Lebanon has in the past had to confront cross-border shootings, shelling by the Syrian army, tit-for-tat kidnappings and sectarian clashes as the violence in Syria escalates.