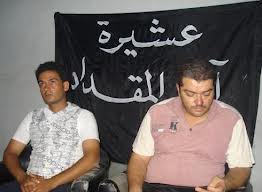 Beirut, Lebanon- The military wing of Al- Mikdad clan announced on Wednesday that it has abducted near Beirut a Turkish national of the Soufan family, media reports stated.

This development comes after the military wing of the al Mikdad family which is closely linked to Hezbollah said it had abducted at least 20 Syrian rebels and threatened to kidnap Qatari, Saudi and Turkish nationals to swap them for their missing kin.

LBC reported that one of the kidnapped Syrian rebels is a captain at the Free Syrian army and another is an officer, who has been wounded.

Photo: Two of the twenty Syrians kidnapped by a the Mikdad clan are seen at an undisclosed location in the Bekaa Valley, east of Lebanon on Wednesday.