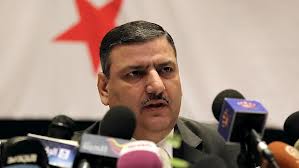 Syria’s newly defected prime minister was helpless to stop the regime’s bloody crackdown against its opponents, he said, urging other military and civilian officials to leave their posts to save the country and its institutions from collapse.

President Bashar al-Assad’s regime is losing control over most of Syria, the former minister, Riad Hijab, said in his first public remarks since he defected earlier this month. “The regime is falling apart morally, financially and economically, and cracking militarily,” he said.

Mr. Hijab’s assessment dovetails with those of other recent high-level defectors, largely former military brass, who for months have said that Mr. Assad’s regime is fragile and that his inner circle is closing ranks, leaving those in the broader government and military institutions demoralized but also fearful of crossing those close to the president.

Also on Tuesday, U.S. officials said they saw Iran expanding its support for Mr. Assad, in part by helping organize a militia in Syria to fight on behalf of the Assad government. “We are seeing a growing presence by Iran, and that is of deep concern to us,” Defense Secretary Leon Panetta told reporters.

Part of this assessment is based on the U.S. officials’ belief that several of the 48 Iranian bus passengers captured by Syrian rebels this month were members of the Iranian Revolutionary Guard Corps. The Iranians were sent to Syria to train government forces and possibly conduct covert missions to aid the embattled Damascus regime, these officials said. Iranian and Syrian officials have denied the captives were government operatives, with Iran saying they were religious pilgrims.

Gen. Martin Dempsey, chairman of the Joint Chiefs of Staff, added that the Syrian army had been overtaxed after 18 months of fighting.

Mr. Hijab, a career government and ruling party functionary from the eastern province of Deir el-Zour on the Iraqi border, was Syria’s agriculture minister when President Assad appointed him prime minister in June, a time when government forces had already conducted brutal operations against Homs and other populated areas. His job was largely administrative and had no involvement in military, security and intelligence matters.

But Mr. Hijab’s characterization of his own powerlessness would suggest that Mr. Assad is continuing to close ranks, leaning on a few key political and security aides while leaving a largely ceremonial government.

“God only knows my suffering, and the agony of my soul, when I watched and heard the shelling of Homs, Deraa, Idlib, Hama, Deir el-Zour, Aleppo, Damascus and the other cities, and not being able to do something to shield them from the killing and injustice,” he said, appearing rigid and occasionally hesitant as he read a 15-minute statement in Jordan’s capital, Amman.

Like the majority of those opposed to the Assad regime, Mr. Hijab is a member of the country’s Sunni majority. The regime’s inner circle, by contrast, is dominated by Mr. Assad’s Shiite-linked Alawite minority sect.

While several top military officials have defected during the increasingly bloody 18-month Syrian uprising, Mr. Hijab represents one of the few top officials or diplomats to have broken ranks. Members of Syria’s opposition and their foreign backers have said that an increase in such defections would serve as a catalyst for toppling Mr. Assad.

Nawaf Fares, Syria’s former ambassador to Iraq and the highest-ranking diplomat to defect, said last month the regime was on its “last legs.”

In his statement on Tuesday, Mr. Hijab appealed to the Syrian armed forces to follow earlier precedents in the region’s Arab Spring uprisings.

“I urge the army to follow the example of Egypt’s and Tunisia’s armies—take the side of the people,” he said. Those armies’ reversals triggered the collapse of their countries’ regimes within weeks.

The U.S. Treasury said Tuesday it was lifting sanctions imposed on the former official. David Cohen, the department’s undersecretary for terrorism and financial intelligence, urged other Syrian officials “to take similarly courageous steps to reject the Assad regime and stand with the Syrian people.”

Meanwhile, some 70 antiregime Sunni Muslim clerics created an association that they said would seek to rein in human-rights abuses and revenge attacks by the rebels, according to a statement issued by the group following a two-day meeting that ended Monday in Doha, the capital of Qatar.

Several instances of summary executions and torture by the rebels have been documented by the media and rights groups in the northern city of Aleppo since fighting began there last month.

Mr. Hijab’s exit from Syria was a covert journey with armed rebels from Damascus to Deraa, 63 miles to the south, and through the border to neighboring Jordan, according to people familiar with the escape.

Mr. Hijab left Syrian territory two days after a spokesman in Amman announced his defection, these people said. At the time of the statement, these people said, Mr. Hijab was in fact hunkered down in a safe house in Deraa, then under artillery attack.

Asked the day after the announcement why Mr. Hijab had yet to make a public appearance, his spokesman, Mohammad al-Outri, said he was recovering from the “very difficult experience of defecting from government and the long journey out.”