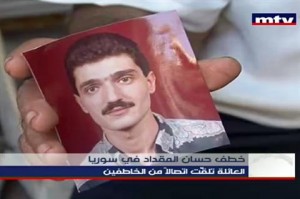 Family members of a Lebanese man held by Syrian rebels say they have captured more than 20 Syrians and will hold them until their relative is freed.

The Lebanese prisoner Hassan Salim al-Mikdad (pictured) appeared in a video released by rebels saying he is a member of Hezbollah, the Lebanese Shiite militant group allied with Iran and Syria. He said he was sent to Syria to fight with regime forces.

Mikdad also said that he was one of 1,500 Hezbollah fighters sent to Syria on Aug. 3. The video was aired by Arab satellite TV Al-Arabiya on Tuesday.

Hezbollah denied al-Mikdad is a member and the family says he has been living in Syria for more than a year.

Abu Ali al-Mikdad, a relative, told reporters in Beirut Wednesday that they have abducted “more than 20 Syrians” including a senior member of the Free Syrian Army rebel group.

The Mikdad family is closely linked to Hezbollah according to a local observer.

The latest development shows that Syria’s violence could easily spillover to Lebanon, where there are deep divisions between supporters and opponents of Assad’s regime.