Earthquakes: US seeks path to Iranian ‘hearts and minds’ 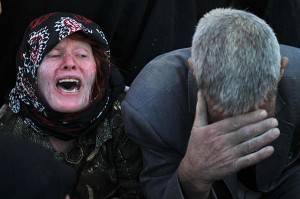 The United States may be imposing what it says are “crippling” sanctions on Iran’s government over its nuclear program, but it has a different message for the Iranian people in the aftermath of deadly earthquakes over the weekend.

“Our hearts go out to those [Iranians] who are affected,” State Department spokesperson Victoria Nuland said Monday. The Iranian government raised the death toll in Sunday’s quakes to 306, with many villages totally wiped out.

The US has long sought to differentiate its actions towards the Iranian government from those aimed at the Iranian people. The earthquakes in northwestern Iran provided the latest opportunity to reach Iranian “hearts and minds” within an over-all punitive approach to the regime in Tehran. The Bush administration issued a general license enabling relief organizations to provide assistance after the devastating earthquake in Bam in 2003, which killed more than 26,000 people.

This time, the US government offered assistance shortly after receiving news of the quakes in Tabriz and Anar, which struck 11 minutes apart with estimated magnitudes of 6.4 and 6.3. Ms. Nuland emphasized that the offer remains “on the table” even though the Iranian government has said it does not need outside assistance.

In addition, Nuland said Americans should know that they are free to make donations of food and medicines to the Iranian quake victims without fearing prosecution under US sanctions laws.

Word of the earthquakes’ devastation prompted immediate but varying responses from Iranian interest groups in the US.

The National Iranian American Council (NIAC), which has favored dialogue over confrontation in addressing Iranian issues including the nuclear program, said that simply noting that Americans are free to send assistance to Iran may not be enough. Noting that sanctions are much tighter today than in 2003 and that more Americans as a result may be under the impression that any transaction with Iran is illegal, NIAC said the US might need to take “more robust steps” to communicate the legality of sending assistance.

In particular, NIAC said, word needs to get out that financial transactions in support of relief work in Iran are permissible.

Other Iranian groups also encouraged supporting the earthquake victims, but cautioned that the Iranian government could not be trusted to administer the aid.

“Americans who want to assist the earthquake victims are certainly encouraged to do so, but they should know that anything that goes through the regime will not get to the victims,” says Ali Safavi, president of the Near East Policy Research consulting firm in Washington and a member of the National Council of Resistance of Iran, an exile group.

“Anything that passes through the regime will be looted and plundered,” says Mr. Safavi, who cites the Bam earthquake experience as proof. “People sent tents and other supplies intended for the many victims left homeless,” he says, “but instead it ended up in the markets for sale by the IRG [Islamic Revolutionary Guards Corps].”

Safavi says the Iranian government is probably not divulging the full devastation of the quakes for fear of feeding the ire of Iranians who are increasingly critical of the regime.

“People are very unhappy that the regime for all these years has been focused on nuclear and military program and exporting terrorism,” he says – instead, for example, of sparking a “national effort to modernize housing and other vulnerable structures” in an earthquake-prone country.

photo: An Iranian woman and a man grieve after their loved ones were killed during Saturday’s earthquake at the village of Bajebaj near the city of Varzaqan in northwestern Iran, Aug. 12.