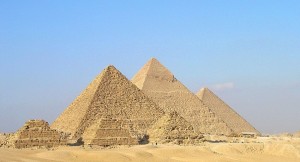 Google Earth Anomalies has reported that two unidentified sites that appear to hold pyramids have been found in Egypt using Google Earth. Satellite archaeology researcher Angela Micol found the sites using Google’s popular program, Google Earth, which allows users to see images of Earth from satellites orbiting in space. Micol found two separate sites in Egypt that have a similar appearance to other famous pyramid sites throughout the country.

The first site holds four structures, one large and three small. The large structure, which is estimated to be 140 feet in width, has been reported to have a four-sided, truncated, pyramid-like shape. The other three structures create a diagonal shape leading to the large structure, much like the Giza Plateau pyramids.

The second site contains two mounds located near a large, triangular plateau. The larger mound is roughly 250 feet in width and the smaller one is about 100 feet in width. Micol proposed that these mounds could have been deliberately organized in a triangular shape around the plateau.

The sites Micol discovered have officially been declared undiscovered by an Egyptologist. It is believed that Egyptologists will soon try to verify Micol’s findings by visiting the sites and conducting further research. “The images speak for themselves,” Micol said. “It’s very obvious what the sites may contain, but field research is needed to verify they are, in fact, pyramids.” If the sites turn out to hold pyramids, Micol said a lot of research would need to be done in order to determine their origins and history.

This is not the first time Micol has found potential ancient sites using satellite technology and Google Earth. She has previously found many archeological sites all over the world, including a possible underwater city near the Yucatan peninsula, which has gained a lot of interest from researchers. Micol said she hopes to work with archeologists on the sites she discovered using this new technology. “This research is the frontier of discovery and it’s just beginning to advance views of our ancient past,” she said.

For now, Micol is focusing on promoting satellite research as a legitimate way to discover new historical sites. She is currently working on a documentary detailing many of the sites discovered using Google Earth and a non-profit organization that encourages the use of satellites for archeological research purposes.

Most of the information on sites found by satellite is not available to the public in order to allow officials to protect the site. However, a select few pictures can be seen online.