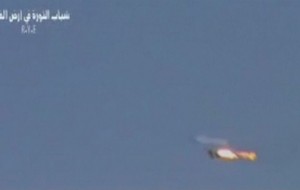 Earlier today the rebels revealed a footage that shows a warplane streaking through the skies amid heavy gunfire. The jet suddenly erupts into flames and begins to swirl, leaving a trail of smoke.

“God is greatest! A Mig fighter jet has been hit in the town of Mohassen,” the activist shouted. There was no indication from the video that the jet had been hit by rebel gunfire or an anti-aircraft missile.

The Syrian government admitted that a warplane has crashed , but claimed it was due to technical malfunction.

“Syrian military plane crashed in the east of the country after the pilot was forced to leave because of a malfunction and the search is ongoing to find him”, official Syrian news agency SANA reported. 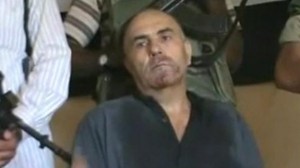 Update : In a video that was shown by the Free Syrian army the pilot was shown and identified himself as Colonel Staff Pilot Mufeed Mohammed Suleiman and said in the video that he was “ordered to bomb the city of Mohassen.”

The pilot, who has a light beard and was wearing a dark blue shirt also said. “The wounds on my face were caused by the strong wind that forced me on to stones after I ejected from my plane.”

“The revolutionaries have treated me well and they gave me first aid assistance,” he added. “They are good people.”

In the same video, a captain in uniform introduced himself as Abul Laith, chief of the Ahfad Mohammed (Mohammed’s Descendants) Brigade. “We will treat this prisoner in accordance with our religion and our ethics and the Geneva Convention on the treatment of prisoners.”