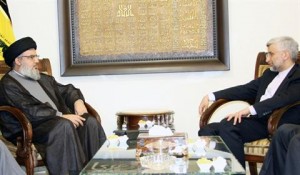 NNA also reported that the two reviewed the latest developments in the region, particularly in Lebanon and Syria.

“ He ( Jalili) is unwelcome in this critical period during which the Syrian people are suffering the most horrible types of massacres and destruction at the hands of Bashar Assad’s regime and its foreign protectors.” Hariri said

“We acknowledge his security and strategic concerns, but instead of spreading weapons here and there he should have catered to the internal affairs of his country, where the price of chicken has become more expensive than rockets”. Jumblatt said in his comments about Jalili’s visit , in a possible reference to the high inflation in Iran ( about 23% ) and the continued devaluation of the Iranian currency “Rial” both of which have reduced the purchasing power of the Iranian people.

While in Lebanon Jalili tried to promote a conference in Tehran that will be held this Thursday to discuss the crisis in Syria, but Lebanon turned down the invitation due to its disassociation policy regarding the conflict.

Lebanon also has not attended any meetings of the Friends of Syria group that brings together representatives from mainly Arab and Western states that support the Syrian opposition.

The turmoil in Syria has spilled over into Lebanon in series of deadly border incidents in recent months.

In Syria Jalili assured Assad of Iran’s continued support for his regime, which is facing an armed rebellion, as well as high-ranking defections from the government and military ranks.

“Iran will not allow the axis of resistance, of which it considers Syria to be an essential part, to be broken in any way,” Syrian state television quoted Jalili as telling Assad during their meeting in Damascus

The “axis of resistance” refers to Iran, Syria and Lebanon’s Hezbollah which was created by The Iranian Revolutionary Guards in 1982

Hussein Amir-Abdollahian, an Iranian deputy foreign minister in charge of Arab affairs renewed Iran’s position for dialogue between the Syrian government and opposition groups to end the bloody conflict.

“The Islamic Republic of Iran believes that a total halt to the violence, and national dialogue are the solution to controlling the crisis in Syria and to that end Iran is organizing this meeting,” he during at a press conference in Moscow Thursday evening.