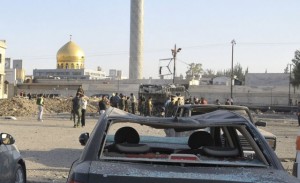 Al-Arabiya TV aired footage on Sunday of the “Free Syrian Army” abduction of 48 Iranians in Damascus in which an FSA officer charges the hostages of being elite Iranian Revolutionary Guards.

“FSA captured 48 of the shabiha (militiamen) of Iran who were on a reconnaissance mission in Damascus,” said a man dressed as an officer of the Free Syrian Army, in the video screened by the Dubai-based Al-Arabiya TV

“During the investigation, we found that some of them were officers in the Revolutionary Guards,” he said, showing documents taken from one of the men, who appeared in the background.

The pilgrims were in a tour bus heading to the Sayeda Zeinab mosque on Saturday when gunmen seized them, according to Al-Alam TV, Iran’s state-run Arabic news channel. 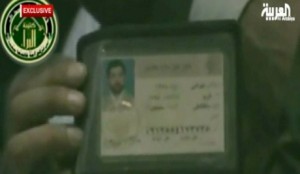 Davutoglu responded by promising “to study the issue and to carry out efforts as in previous cases,” it said.

Turkey played a role earlier this year in helping to free several other Iranians who had been kidnapped in Syria.

Several groups of Iranians have been abducted in Syria since the uprising began.

Five Iranian engineers were kidnapped in the flashpoint city of Homs in December. Iranian media said that they had all been released by last month. A group of pilgrims were snatched in January and another in February. Most have been released, Iranian media reported.