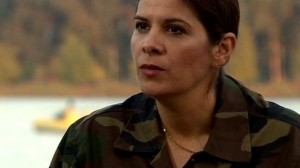 Just a few months ago, Thwaiba Kanafani was leading a normal life with her husband, six-year-old son and three-year-old daughter in Canada.

An engineer by training, she had been working in the oil industry.

But now she has left all that behind.

When we met up in the city of Adana in southern Turkey, she had just fled across the border from the Syrian city of Aleppo after a mission with rebel forces that went wrong.

Two male colleagues who were acting as her minders, were killed.

At the end of June she joined the Free Syrian Army (FSA) and was given a particularly dangerous role to fulfil.

As a woman she has able to move more easily around the streets of Aleppo than the men.

“Lots of women are working with me and we do a lot of spying work,” she says.

“We usually check the locations of regime people [military forces] and check where would be the best points to locate the Free Syrian Army.

“We also spy on high-ranking people in the government so we can help the FSA arrest and capture them.”

In the midst of all this, she speaks on the phone with her family every day to reassure them she is fine.

“I wonder why I am not afraid of being shot through the head,” she says pointing to her forehead.

“But sometimes when you face death, you lose your fear.”

Thwaiba Kanafani is one of a growing number of Syrians without any previous military experience who have joined the rebels.

There is a special training programme based in Turkey at secret camps run by the Turkish military, she says.

“The Turkish people are really helping us. Lots of people are getting training in those camps.”

“The training is really professional. You can only sleep four hours a day.

“You have to climb mountains, you get weapons training. It’s hard work.”

Qatar and Saudi Arabia are also reported to be providing assistance for what has been described as a secret nerve centre for military aid and communications for the Syrian rebels.

This is reported to have been set up in Adana.

None of these countries has confirmed the existence of the base.

Separately, Syrian opposition sources have told the BBC they have been called to meetings with foreigners in Istanbul in recent weeks to discuss recruiting volunteers from different cities in Syria to staff an “operation room” in Turkey.

The aim is to co-ordinate and plan rebel actions and the supply of weapons.

Turkey has denied supplying weapons to the Syrian rebels.

The failure of the United Nations to reach agreement on how to resolve the Syrian crisis seems to have spurred a number of countries to step up unilateral assistance to rebel forces.

It has been reported in recent days that US President Barack Obama has given the go-ahead for covert help to be provided, although it is not clear what kind of assistance is being considered.

On Friday the British government confirmed it would provide more communications equipment to the rebels next month.

The rebels themselves have been asking the international community for many months for much more sophisticated weapons, including portable anti-tank and anti-aircraft missiles.

This, they believe, would turn the tide of the conflict decisively in their favour.

At the moment helicopter gunships and fighter jets of the Syrian armed forces are able to carry out frequent attacks on rebel positions and tanks are being used in all major operations.

But so far countries backing the rebels have been reluctant, fearing the consequences of such weapons getting into the hands of jihadi groups now operating inside Syria.