Syria: Worst violence may be yet to come. Hama massacre 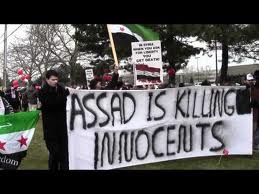 The U.N. General Assembly will convene over the Syrian crisis Friday, a day after Kofi Annan quit as special envoy to the nation following months of failed attempts to stop the bloodshed.

Annan, a former U.N. chief, has scrambled to forge peace amid reports of surging violence across the country.

A 10-year-old was among two people killed in Hama early Friday due to “indiscriminate shelling,” the opposition Local Coordination Committees of Syria said.

The LCC described a “massacre’ Thursday in Hama, where at least 50 people were killed by the regime’s heavy shelling and gunfire, the opposition network said.

Across the country, at least 130 people were killed Thursday, the opposition Local Coordination Committees of Syria said.

And the worst violence may be yet to come.

Officials believe the “main battle” is about to begin in the biggest city of Aleppo, the U.N. peacekeeping chief said Thursday.

“The focus is now on Aleppo, where there has been a considerable buildup of military means, and where we have reason to believe that the main battle is about to start,” said Herve Ladsous, the United Nations under-secretary-general for peacekeeping operations.

Hours before he spoke, Syrian rebels battered a military base near Aleppo as the battle for the nation’s cultural and commercial hub raged, opposition activists said.

Regime warplanes shelled the western and northern parts of the city, the opposition Local Coordination Committees of Syria said.

Rebels are now equipped with heavy weaponry such as tanks, the United Nations said, a sign that the armed resistance to President Bashar al-Assad’s regime is gaining military potency.

Syrian state TV said soldiers “have been able to eliminate scores of terrorists and mercenaries” in Aleppo and claim to be sweeping through the city’s Salaheddine neighborhood and towns west of Aleppo.

Syria’s uprising: From rocks to RPGs

The fighting has devastated the Syrian economy and left many people in dire straits. As many as 3 million Syrians will need food in the next 12 months as farmers in the conflict-ravaged nation lose assets and livestock, the United Nations said Thursday.

The Syrian agricultural sector has suffered $1.8 billion in losses this year, including crops, livestock and irrigation systems, according to the report.

“While the economic implications of these losses are quite grave, the humanitarian implications are far more pressing,” said Muhannad Hadi, the World Food Programme representative in Syria.

The Syrian crisis started when al-Assad’s security forces launched a violent crackdown on peaceful protests in March 2011. That clampdown spurred a nationwide uprising as armed rebels, including military defectors and other fighters, battled under the Free Syrian Army.

On Wednesday, U.S. officials said President Barack Obama had signed a covert directive authorizing U.S. support for Syrian rebels. The secret order, referred to as an intelligence “finding,” allows for clandestine support by the CIA and other agencies.

The Obama administration had said it would step up its assistance to the opposition after failure by the U.N. Security Council to agree on tougher sanctions against the al-Assad regime. But exactly what type of support the intelligence finding authorizes was unclear. The Obama administration has ruled out arming the rebels for now, providing only nonlethal assistance, such as communications equipment.