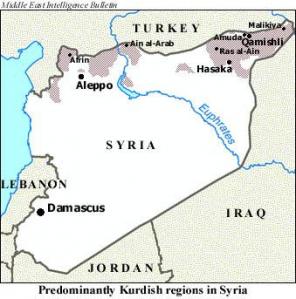 Turkey and Iraq’s autonomous Kurdish region have said in a rare joint statement that they will tackle any threat from a violent group or organization that exploits the power vacuum in Syria, an apparent reference to Kurdish rebels in Turkey and Syria.

Turkey launched a military drill Wednesday just across the border from a Syrian town it claims is controlled by Kurdish rebels — a show of muscle aimed at Kurdish separatists pushing for autonomy within Turkey’s borders.

The Turkish government last week said Turkish Kurdish rebels have seized control of five towns along the border in collaboration with Syria’s Democratic Union Party, or PYD— an ethnic Kurdish grouping. Turkey alleges that many of the rebels migrated to civil-war engulfed Syria from bases in northern Iraq.

The idea that Syria, like northern Iraq, could become a safe haven for Turkish Kurdish rebels is an anathema to Turkey’s leaders.

The Turkish military has targeted rebel bases of the outlawed Kurdistan Workers’ Party, or PKK, in northern Iraq several times in the past, and the government hinted that it would not hesitate to do the same against any rebel position in Syria. The rebels have been fighting for autonomy in Turkey’s southeast in a war that has killed tens of thousands of people since 1984.

Turkey’s Foreign Minister Ahmet Davutoglu met with the president of Iraq’s autonomous Kurdish region, Massoud Barzani, in northern Iraq to urge him not to support the Syrian political party

“Our message has been well received,” Turkey’s state-run TRT television quoted Davutoglu as saying after the meeting late Wednesday.

Turkey and the Iraqi Kurdish administration stressed their “deep concern regarding instability and chaos in Syria,” in a joint statement, the Foreign Ministry said early Thursday.

Turkey and Iraqi Kurds also agreed to coordinate their efforts with a view to helping Syrian people “to achieve their legitimate aspirations for a democratic, free and pluralistic Syria where all citizens will enjoy equal rights and freedoms.”

“In the new Syria, all ethnic, religious or sectarian identities should be respected and their rights should be guaranteed and protected,” the statement said.

Turkey has emerged as a fierce critic of Syrian President Bashar Assad, whose regime is fighting to survive as a popular uprising that began in March 2011 has evolved into a civil war. Rights activists estimate Syria’s conflict has killed more than 19,000; it also has eroded Assad’s grip on parts of the country.

Turkey has taken in tens of thousands of Syrian refugees. It also has moved anti-aircraft missile batteries to the Syrian border after Syria downed a Turkish reconnaissance jet in June, and it recently began deploying tanks to border areas.

At the same time, Turkey has been wary of the effect of the Syrian conflict on the Kurdish people, who make up significant portions of the population in Turkey as well as Syria, Iran and Iraq.