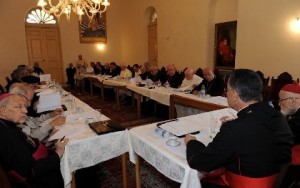 Following its monthly meeting headed by Patriarch Beshara al-Rai, the Maronite bishops council warned on Wednesday of economic collapse in Lebanon because of the state’s failure in meeting the needs of the private and public sectors.

The bishops blamed the current situation on poor economic policies, lack of a clear, unified vision, putting personal and sectarian interests before national interests, lack of respect for the rules of democracy, increase in corruption, and poor decision-making capability due to the deep political divisions.

The bishops called for:

– Launching a partnership between the private and public sectors( which includes citizens residing in Lebanon as well as expatriates) “to encourage smart investments in infrastructure, which has been frighteningly eroded.”

– Tackling the public debt through devising budgets that can be implemented on the long-term . They recommended “a five-year plan to lower public debt and the establishment of a special fund to remedy public debt.”

– Speeding up the implementation of decentralized administration.

– The state to exercise its authority throughout Lebanon.

– People to realize their democratic rights in order to elect officials that can be held accountable for their duties.

– Officials must also assume their moral and national responsibilities

The Bishops stressed that given this dangerous situation they have to speak up because the Lebanese people are the victims.

“The church cannot distance itself from an issue whose primary victims are the people, especially the poor.”

The bishops cited the electricity crisis, the accumulation of public debt, the corruption in government institutions and the adoption of incomplete economic policies as being the main reasons behind the economic disaster.

They also identified “the instability of international oil prices” as “a major problem from which Lebanon suffers.”

The Council said rising oil prices have made the production of power more expensive, with negative repercussions on agriculture, industry and services.