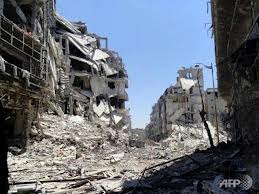 Syrian combat aircraft and artillery pounded Aleppo late into the night as the army battled for control of the country’s biggest city, where rebel fighters said troops loyal to President Bashar al-Assad had been forced to retreat.

During the day on Tuesday large clouds of black smoke rose into the sky after attack helicopters turned their machineguns on eastern districts for the first time in the latest fighting and a MiG warplane later strafed the same area.

After nightfall, Reuters journalists in Aleppo heard loud explosions somewhere near the city. At least 10 volleys of shells lit up the night sky and drowned out the sound of the Islamic call to prayer. Carloads of rebel fighters shouting “God is great” sped off towards the fighting.

The battle for Aleppo, Syria’s largest city, has become a crucial test for both sides in the 16-month-old rebellion. Neither Assad’s forces nor the rag-tag rebels can afford to lose if they hope to prevail in the wider struggle for Syria.

Syria’s civil war has entered a far more violent phase since July 18 when a bomb killed four top members of President Bashar al-Assad’s inner circle. Serious fighting reached Aleppo over the past week and rebels also launched an assault on the capital Damascus in July but were repulsed.

Heavy gunfire echoed around the Salaheddine district in the southwest of the city, scene of some of the worst clashes, with shells raining in for most of the day.

Reuters journalists have established that neither the Syrian army nor rebel fighters are in full control of the quarter, which the government said it had taken on Sunday. 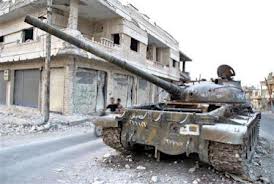 Salaheddine resembled what one journalist called a “ghost town”, its shops shuttered, with no sign of life.

Rebel fighters, some in balaclavas and others with scarves around their faces, fired machineguns and assault rifles around street corners at invisible enemies. Wounded civilians and fighters were carried to makeshift dressing stations.

A rebel commander in Aleppo said his fighters’ aim was to push towards the city center, district by district, a goal he believed they could achieve “within days, not weeks”.

The rebels say they now control an arc that covers eastern and southwestern districts.

“The regime has tried for three days to regain Saleheddine, but its attempts have failed and it has suffered heavy losses in human life, weapons and tanks, and it has been forced to withdraw,” said Colonel Abdel-Jabbar al-Oqaidi, head of the Joint Military Council, one of several rebel groups in Aleppo.

Oqaidi told Reuters that more than 3,000 rebel fighters were in Aleppo but would not give a precise number.

The fighting has proved costly for the 2.5 million residents of Aleppo, a commercial hub that was slow to join the anti-Assad revolt that has rocked the capital, Damascus, and other cities.

Rebels say they will turn Aleppo into the “grave” of the Assad government. Thousands of residents have fled and those who remain face shortages of food and fuel and the ever-present risk of injury or death.

“We have hardly any power or water, our wives and kids have left us here to watch the house and have gone somewhere safer,” said Jumaa, a 45-year-old construction worker, who complained it was nearly impossible to observe the fasting month of Ramadan.

Makeshift clinics in rebel-held areas struggle to deal with dozens of casualties after more than a week of fighting.

Up to 18,000 people have been forced to leave their homes in Aleppo and many frightened residents were seeking shelter in schools, mosques and public buildings, according to figures given by the U.N. refugee agency in Geneva.

Rebel fighters, patrolling parts of Aleppo in pick-up trucks flying green-white-and-black “independence” flags, face a daunting task in taking on the well-equipped Syrian army, even if the loyalty of some of its troops is in doubt.

Armed with Kalashnikov assault rifles, machineguns and rocket-propelled grenades they are up against a military that can deploy fighter jets, helicopter gunships, tanks, armored fighting vehicles, artillery and mortars.

The most powerful military in the region, NATO member Turkey, has been moving armored columns towards the border, although it has given no indication they will cross over.

Turkish Prime Minister Tayyip Erdogan, once a friend of Assad, has become among his most vocal opponents. Erdogan spoke by phone to U.S. President Barack Obama on Tuesday.

“God willing, the brotherly Syrian people and the Middle East will soon be freed from this dictator with blood on his hands, and his regime, which was built on blood,” Erdogan said late on Tuesday in a monthly television address.

“Assad and his bloodstained comrades know well that they have reached the end, and that their fates will not be different from those of previous dictators.”

Assad, a member of the Alawite minority sect, an offshoot of Shi’ite Islam, is now opposed by the leaders of other Arab states, nearly all of which are led by Sunni Muslims, as well as by Turkey and the West.

Within the region he retains the support of Shi’ite-led Iran, and in the U.N. Security Council he has been protected by China and Russia.