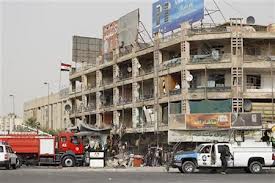 Two cars exploded within five minutes of each other Tuesday, killing 20 people and wounding 57 in an upscale Shiite neighborhood in Iraq’s capital, officials said.

The afternoon’s double blast sent plumes of black smoke over Karradah, a busy shopping district across the Tigris River from the Green Zone. The sounds of gunshots could be heard from blocks away.

The violence brought the July death toll to 244 people killed in shootings and bombings in al-Qaida attacks as the terror group seeks to take advantage of political instability in Iraq and move into areas it was forced out of before the U.S. military left the country last December.

Tuesday’s explosions came in the middle of Baghdad’s rush-hour as streets were clogged with people heading home from work.

Police said the first car blew up near a restaurant at a Karradah square, and down the street from a police station and a security checkpoint. Six people were killed and 21 wounded.

Five minutes later, the second car blew up outside an Iraq passport office a few kilometers (miles) away, killing 14 and injuring 36. The attack also came about 400 meters (yards) from a major Interior Ministry headquarters.

Saadoun Hussein was selling cigarettes in a small nearby shop where the roof partially caved in from the second blast. He escaped unharmed.

“I think that terrorists were intending to attack the passport directorate, but failed to reach their target because of the traffic jam,” said Hussein, 23.

Security forces and government offices are top targets for insurgents seeking to prove how unsafe Iraq remains. Six policemen were among the killed, and another 16 were hurt in the blasts.

Police and health officials confirmed the casualties but spoke on condition of anonymity because they were not authorized to release the information.

Earlier this month, al-Qaida’s leader in Iraq threatened to push back into areas the group was driven out of after sectarian fighting peaked in 2007. A day after al-Qaida issued the threat, shootings and bombings killed 115 people in Iraq’s deadliest day in more than two years.