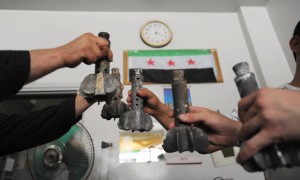 The Syrian regime accused regional powerhouses Saudi Arabia, Qatar and Turkey of trying to destroy the country and vowed Sunday that it would defeat rebels who have captured large swathes of the commercial hub Aleppo.

Military forces in Aleppo fired tank and artillery shells at neighborhoods as rebels tried to repel the government air and ground assault. According to activists, rebels who launched an operation to take over Syria’s largest city a week ago are estimated to control between a third and a half of Aleppo’s neighborhoods.

Foreign Minister Walid al-Moallem, on a visit to Iran, leveled some rare public criticism of Sunni powers in the Middle East, saying Qatar, Saudi Arabia and Turkey are supporting a plot hatched by Israel to destroy Syria. The three countries have all been backing rebels trying to overthrow authoritarian President Bashar Assad.

“Israel is the mastermind of all in this crisis,” Moallem told a joint news conference in Tehran with his Iranian counterpart Ali Akbar Salehi . “They (Qatar, Saudi Arabia and Turkey) are fighting in the same front.”

The battle for Aleppo, once a bastion of support for Assad’s regime, is critical for both the regime and the opposition. Its fall would be a major blow to Assad, giving the opposition a major strategic victory with a new stronghold in the north.

“They mobilized all their armed terrorists and tried to capture Damascus in less than a week,” Moallem said. “They were defeated. Today, they’ve gone to Aleppo and definitely they will be defeated in Aleppo,” he added. The rebels mounted a challenge to the regime in Damascus before the assault on Aleppo, but after a week of intense clashes, they were defeated.

Iran, Syria’s only remaining ally in the Middle East, has provided Assad’s government with military and political backing for years, and has kept up its strong support for the regime since the uprising began in March 2011.

Sunday’s bombardment was part of a government counter-offensive to retake control of districts that had fallen into rebel hands last week at the beginning of their bid to capture Aleppo.

Activists said the shelling was most intense in the southwestern neighborhoods of Salaheddine, Bustan al-Qasr and parts of Saif al-Dawla, some of the first areas seized by the rebels when they started the push last week after being routed in a similar attack against the capital Damascus.

“Life in Aleppo has become unbearable. I’m in my car and I’m leaving right now,” said a Syrian opposition writer who was fleeing the city Sunday. “There’s shelling night and day, every day,” he said, speaking on condition of anonymity for fear of reprisals.

The writer and other activists from Aleppo said economic conditions had become dire in the city.

“Bread, gasoline and gas are being sold on the black market at very high prices,” he said. “Many things are in shortage.”

State-run news agency SANA said security agents were hunting down armed groups in several areas of Aleppo including Salaheddine, inflicting heavy losses upon the “terrorists” – the term authorities use to describe the rebels.

SANA quoted an Aleppo official as saying troops would continue until the city is “purged” of armed groups and peace and tranquility is restored.

Syrian Interior Minister Mohammad al-Shaar vowed late Saturday that the Syrian army would root out terrorism and restore order to Syria. Al-Shaar was making his first televised appearance since he was wounded in the July 18 bomb attack in Damascus that killed four other top security leaders in Assad’s inner circle.

Al-Shaar’s arm was bandaged, but he said he was back at his job with “greater determination.”

Mohammad Saeed, an Aleppo-based activist, said Sunday’s shelling was some of the heaviest seen yet.

“But the rebels are still holding up well,” he said. “No ground troops have been able to enter. They are shelling from outside.” He said rebels were fighting back against the attackers.

He said around 200 fighters entered the city Sunday to join about 1,000 fighters who had poured into the city in the past few days to take on the Syrian army, which had been massing forces around the city ahead of the bombardment.

He also said rebels have received “a new batch of weapons and ammunition,” but declined to say from where.

An amateur video posted online by activists showed flames and black smoke billowing from a building in the Bustan al-Qasr district of Aleppo.

Another video showed rebels celebrating the seizure of a tank in the town of al-Bab in Aleppo countryside. Dozens of rebels, some waving Kalashnikov rifles, sat atop the tank as it drove through al-Bab, while residents shouted “Allahu Akbar” and motorists honked their horns in celebration.

The international community has raised an outcry about a possible massacre in this city of 3 million but acknowledged there was little they could do to stop the bloodshed. The foreign minister of Russia, a powerful ally of Syria, said over the weekend it was “simply unrealistic” for Damascus to cede control of Aleppo.

The violence has sent refugees flooding into neighboring countries including Jordan, Turkey, Iraq and Lebanon.

Jordan said it had opened its first tent camp for Syrians, saying a surge of refugees forced it to do so.

Authorities had been reluctant to set up the camps, possibly to avoid angering Assad’s regime by concentrating images of civilians fleeing his military onslaught.

But with 142,000 Syrians refugees and their numbers growing daily by up to 2,000, Foreign Minister Nasser Judeh said Sunday that Jordan had no other choice. He spoke at the camp’s opening ceremony in the hamlet of Zataari, about 11 kilometers (7 miles) from the northern border with Syria.