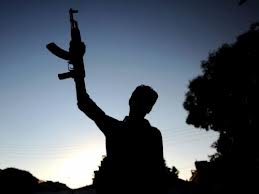 Fierce fighting has erupted in rebel-held districts of Aleppo, a day after opposition forces repulsed an offensive by government troops in Syria’s second-largest city, a human rights group said.

“Intense clashes took place in the districts of Bab al-Hadid, Zahraa, Arkub and Al-Hindrat Camp as explosions were heard and aircraft were sighted overhead,” the Syrian Observatory for Human Rights said on Sunday.

Helicopter gunships flew over the Saif al-Dawla district as well as Salaheddin, where rebels held off an offensive by ground troops backed by tanks and helicopters on Saturday, the Britain-based rights group said.

In the central city of Homs, a battle broke out near the police headquarters between troops and rebel fighters, of whom at least one was killed.

Near the capital, sniper fire killed a civilian in the town of Irbin, the Observatory said. Two more were killed in shelling in Idlib province in the northwest.

The London-based watchdog said more than 20,000 people, mostly civilians, have now died since the uprising against Assad’s government erupted in March 2011.

Civilians on Saturday crowded into basements seeking refuge from the bombing, with the Observatory’s Rami Abdel Rahman describing the clashes as the “fiercest” of the uprising.

“There are thousands of people in the streets fleeing the bombardment. They’re being terrorised by helicopter gunships flying at low altitude,” said an activist, adding many had taken refuge in public parks.

Colonel Abdel Jabbar al-Oqaidi of the rebel Free Syrian Army said his forces on Saturday had repulsed troops in Salaheddin district and that the regime offensive had been temporarily stopped.

“We managed to force the army to the neighbourhood of Hamdaniyeh,” he told AFP news agency on the phone, adding that while the army had been halted on the ground, artillery and gunships continued to pound the city.

Abdel Rahman said the fact the soldiers had been stopped in Salaheddin “does not necessarily mean a withdrawal as their strategy is to bombard … to cause an exodus then launch an assault even more fierce”.

An AFP correspondent said rebels were poised to launch a final raid on a strategic police post in the city centre, where 100 men armed with Kalashnikovs have been holding out for three days.

Its capture would open a corridor between Salaheddin and the rebel-held district of Sakhur, some 6km to the northeast.

Meanwhile, Syrian National Council chief Abdel Basset Sayda called for the rebels to be armed and said the opposition would discuss a proposed transitional government with rebel forces.

He insisted that Assad should be tried for “massacres” and not be offered asylum in any future solution.

“We want weapons that would stop tanks and jet fighters. That is what we want,” he said following talks in Abu Dhabi.

He urged Arab “brothers and friends to support the Free [Syrian] Army” saying the support should be “qualitative because the rebels are fighting with old weapons”.

He said the rebellion needed support in order to achieve a “significant change” in the uprising that began in March last year.

Sayda said the opposition needed a minimum of $145m monthly to provide basic needs but had received only $15m over several months.

He added that any future plan should not include an amnesty for Assad, saying he should be put on trial.

“The Yemeni example can’t be applied in Syria,” he said, referring to the amnesty given to former Yemeni president Ali Abdullah Saleh following mass protests.

“There are massacres being committed. We believe Bashar al-Assad should be tried. He is a criminal and should not be given a shelter,” he added.