Qandil’s Egyptian cabinet to be unveiled by July 28 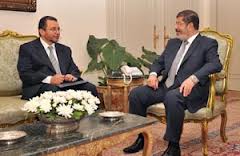 Egyptian Prime Minister-designate Hisham Qandil said he expects his new government to be unveiled by July 28 at the latest, the state-run Middle East News Agency reported.

The outgoing government will perform its duties until the new cabinet is formed, MENA cited Qandil as saying.

The appointment of the little-known Qandil two days ago by President Mohamed Mursi as prime minister prompted criticism from some secular groups that Qandil fell short of the national- unit figure the president had pledged to name to steer the country forward. None of the names of potential cabinet members circulating in the local press are well-known to the public.

There are no disputes between Mursi and the formerly ruling Supreme Council for Armed Forces over the defense portfolio, Mursi’s spokesman, Yasser Ali, said according to MENA. The council met to “review and study the affairs involving the armed forces,” the news agency reported.

The presidential team comprising Mursi’s vice presidents and assistants will be announced “within hours,” Ali was cited by MENA as saying. Mursi had vowed during his electoral campaign to  appoint a female and a Coptic as deputies.