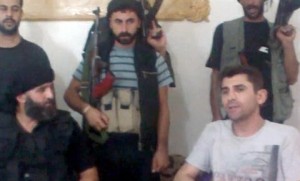 One of the so called false witnesses in the case of the assassination of former Lebanese prime minister Rafik Hariri was captured in Damascus by the Free Syrian Army rebels .

Hussam T Hussam a Syrian intelligence operative who was used by the Syrian regime in 2005 to discredit the investigation of Hariri murder was shown in a video posted on YouTube Sunday with the rebels.

Hussam said in the video that he was arrested by members of the Free Syrian Army on the Mezzeh highway in Damascus.

One of FSA members said in the video: “We, from the Damascus Brigade, were able with the help of God to arrest Hussam Hussam yesterday .”

Asked by the FSA member whether he had information on the Hariri assassination, Hussam said: “Just let me reach Beirut and I will reveal surprises that you have never dreamed of.”

Addressing Saad Hariri, the FSA member said: “In my name and the name of the revolutionaries of Damascus and Syria, we will send you a gift, that is Hussam Hussam.”

Hussam gave a testimony in 2005 to the U.N. International Independent Investigation Commission which was headed by German judge Detlev Mehlis and which was investigating the assassination of the former PM. He testified that Syrian and Lebanese security chiefs were involved in the February 14, 2005 bombing that claimed the lives of Hariri and 22 others.

A few months later ( November 2005), Hussam was shown on State TV in Damascus, recanting his testimony and lashing out at Saad Hariri and the March 14 coalition.

Hezbollah also used Hussam along with Mohammad Zuheir al-Siddiq to discredit the Hariri investigation and the Hariri court, Special Tribunal for Lebanon ( STL) by calling them false witnesses. Four members of Hezbollah were indicted in the Hariri murder, but the militant group refused to hand them over to STL.