The Syrian regime may be crumbling, Analysts

The explosion that killed three of Bashar Assad’s inner circle Wednesday eliminated the Syrian president’s top security team and, along with fighting in the capital, may indicate the regime is crumbling, Syria analysts say.

“I think it could prove a decisive event,” said Paul Salem, director of the Carnegie Middle East Center. “In the last couple of weeks, there have been dramatic events that have indicated a meltdown. Most significant has been the fighting in Damascus, which demonstrates a massive loss of control by the regime.”

Fighting in the capital has intensified over the past four days as rebels from the Free Syrian Army (FSA) clash with regime forces. Salem said the nature of the bomb attack suggests Assad’s opponents may have informers close to the regime.

“It implies cooperation or even infiltration,” Salem said.

Sami Ibrahim, an activist with the Syrian Network for Human Rights in Damascus, said the attack has given a major boost to the rebellion, which has been hammered by Syrian forces in an uprising that has left 17,000 people dead in 17 months.

“There is a feeling of great happiness,” he said. “Those people who died (in the bombing) were killers of the Syrian population for more than 1½ years.” 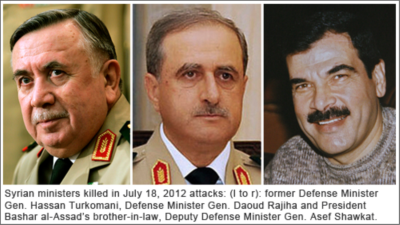 Shawkat oversaw the 30-year Syrian military occupation in Lebanon. Rajha, an artillery specialist, was the highest-ranking Christian in the mostly Alawite-Muslim regime. Turkmani headed the regime’s response to the uprising and was accused by the Free Syrian Army of issuing orders to torture anti-Assad activists and fighters.

“The death of these key regime figures is a severe blow to the Syrian regime since this particular crisis unit led the repressive operations against the rebellion,” said Col. Aref Hamoud of the Free Syrian Army, speaking from Turkey.

Both the Free Syrian Army, a rebel force made up of deserters and regime opponents, and Liwa Al-Islam, an Islamist group, claimed responsibility for the explosion. The FSA claimed its compatriots planted the bomb in the security briefing room.

Despite the sense of victory after the attack, there is fear among the opposition over how the regime will react.

“I think it’s going to lash out … much more shelling, much more use of combat aircraft, use of chemical weapons,” said Andrew Tabler, senior fellow in the Program on Arab Politics at the Washington Institute.

Tabler said the regime appears to have less of a hold over Syrian territory but will not necessarily collapse soon. Activists agreed, saying that unless the international community steps in, the bloodshed will continue.

“Without interference from the (United Nations) Security Council, from the USA andNATO, it will take more time and more people will die,” Ibrahim said. “We are expecting massacres in Damascus after what happened today. The reaction will be very hard.”

If the rebels are victorious, it will be “no thanks to the United States,” Pletka said. “We have refused to facilitate defections. We bad-mouthed the opposition. We kowtowed to the Russians as they sought to protect their relationship with Assad.”

President Obama refused requests from Assad opponents and some in Congress to arm the rebels, saying it would make the situation worse. He left that role to Saudi Arabia, Qatar and Turkey, which could harm peace in the region and U.S. interests, Pletka said.

The Qataris and Saudis are “Wahabi Muslims who support extremist Islamists,” she said. “The Turks support the Muslim Brotherhood.”

If the United States had been more involved, it could have helped shape a transition to ensure a stable relationship between Israel and Syria, Pletka said.

Tommy Vietor, spokesman for the White House National Security Council, said the administration has supported sanctions and leads an international effort to get Assad to go.

“The notion that we either flood Syria with arms or we’re not helping the opposition is ridiculous,” he said.

The United Nations Security Council is to vote Thursday on sanctions against Syria that may allow for eventual use of force. Russia and China have vowed to veto such measures.

Pletka said it’s not too late for the United States to protect its interests. It could work aggressively with the Syrian National Council, a political opposition group in exile, to help it form a transition plan that includes all of Syria’s political parties, protects minorities and prevents more violence, she said.

“There is still going to be fighting even after Assad is gone because they’ll be fighting for control of the country,” Pletka said. “Assad leaving is the beginning of the transition, not the end.”