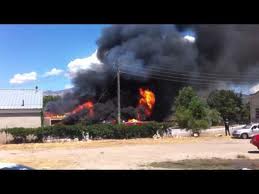 The Syrian consulate in Kazakhstan’s largest city Almaty has been seriously damaged by a fire which staff blamed on an arson attack linked to the conflict raging in the country, a report said Tuesday.

Kazakh private KTK television said the entire third floor of the building where the consul’s office was situated and documents held had burned down entirely along with all the archives.

It said that staff believed attackers had thrown petrol bombs at the building and were convinced foul play was the cause as no valuables had been taken. There was no immediate comment from the local police.