Syria fighting rages in capital as Russia pressed by Annan 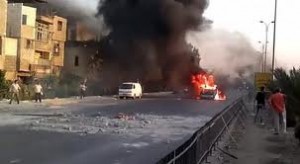 Beirut, Lebanon- Clashes in Damascus between rebels and state forces raged for a third day on Tuesday, in the fiercest fighting to hit Syria’s seat of power since the revolt against President Bashar al-Assad began 17 months ago.

Security forces and armoured vehicles surrounded rebellious areas such as the southern district of Midan but have been unable to rout opposition fighters, activists say.

The encroachment of violence into the Syrian capital, Assad’s home and government stronghold, comes as United Nations envoy Kofi Annan is visiting Moscow to promote a peace plan for Syria.

He will meet President Vladimir Putin on Tuesday, but Russia still appears resistant to Western calls for Moscow to increase pressure on Assad.

Video uploaded by opposition activists showed men in jeans hiding in sandbagged alleyways, firing rocket-propelled grenades and machine guns amid clouds of dust as gunfire crackled. Rebels burned tyres and blocked some streets to ease pressure on the fighters. Black columns of smoke billowed over the capital.

Activists said artillery and rocket fire hit the opposition area of Tadamon, on the outskirts of the capital.

“There are troops everywhere, I can hear ambulances,” said a resident near Midan. “It feels like a war in Damascus.”

The government has said little about the unrest moving to the capital. State television reported on Monday that security forces were chasing “terrorist groups” hiding in some neighbourhoods in Damascus.

One fighter told Reuters the rebels were continuing their fight because they had no way to retreat to safer areas. “If they could leave, they would,” he said.

Opposition activists said clashes close to the seat of government showed that rebels were chipping away at state power in a capital once seen as Assad’s impenetrable stronghold.

“When you turn your guns against the heart of Damascus, on Midan, you have lost the city,” said Damascus-based activist Imad Moaz. “The rebels in the street have the support of families across Damascus.”

The Syrian Observatory for Human Rights said fighting spread to other areas of the capital overnight and early on Monday. It said helicopters flew overhead as some areas were shelled.

Activist Yaacoub Hossein, an activist in the besieged Tadamon neighbourhood, said rebel units had been dispersed across the city to avoid the same fate as the rebel stronghold of Baba Amr in the central city of Homs, which security forces surrounded and razed in March.

“They learned from Baba Amr not to concentrate their forces, they got brutally crushed. So fighters are spreading. You’ll notice the fighting will jump from place to place,” he said on Skype.

As fighting raged in the capital, clashes and shelling in opposition areas continued across the country. The British-based Observatory, which has a network of activists across the country, said more than 150 people were killed on Monday.

Activist accounts are hard to verify because the government restricts access to international media.

With violence rising, the West wants Moscow to drop its support for Assad. Along with China, Moscow has vetoed action against the president at the U.N. Security Council. But before talks with Annan, Foreign Minister Sergei Lavrov signalled no change in Moscow’s position.

Lavrov said Western efforts to pass a Security Council resolution, which would extend a U.N. monitoring mission in Syria and also include a threat of sanctions, contained “elements of blackmail”. He called for support for Moscow’s rival text, which does not call for sanctions.

“If our partners decide to block our resolution no matter what, then the U.N. mission will not have a mandate and will have to leave Syria. That would be a pity,” he said.

The small, unarmed U.N. monitoring mission of about 300 is the only international military presence in Syria. It was brought in as part of a peace plan backed by Annan, but suspended due to rising violence in Syria. Activists say more than 17,000 people have died.

U.S. Secretary of State Hillary Clinton, interviewed by the BBC during a Middle East tour, said she hoped Moscow would open the way for a Yemen-style transition to avoid all-out civil war. Former Yemeni President Ali Abdullah Saleh stepped down in February after months of protests, in a U.S.-backed transfer of power brokered by Yemen’s wealthy Gulf Arab neighbours.

“The international community has been more than ready to impose all kinds of pressure on the Assad regime,” Clinton said.

“Unfortunately, we haven’t been able to do that (tip the balance in the Syria conflict) and part of it is because the Russians are very clear: they don’t want to give any opening for force that could be used.”

Saying she had spoken to Annan before his Moscow trip, she said: “I hope he’s able to persuade the Russians that there’s a way forward that they should sign on to.”

Activists reported at least seven people killed in the fighting in Damascus on Monday, but said casualties were hard to verify due to difficulty of movement in violence-hit areas.

What began as a protest movement in Syria, inspired by demonstrations in other Arab countries, has become an armed insurgency fighting against Assad’s crackdown. The International Committee for the Red Cross now classifies the conflict as a civil war.