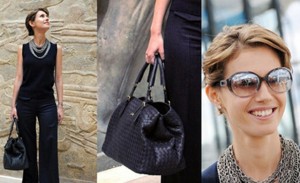 In the midst of ongoing bloodshed and despite economic sanctions, Syrian first lady Asmaa al-Assad turns out to have paid thousands of dollars to buy new furniture.

According to the most recent WikiLeaks reports, Asmaa al-Assad paid more than $440,000 in online purchases from DN Designs, a furniture shop in Chelsea in West London.

Based on the emails WikiLeaks was able to gain access to, the purchases were mainly for the Latakia presidential summer palace that is currently being renovated.

Assad made the purchases also using the ministry’s email addresses and signed it “aaa” (Asmaa al-Akhras al-Assad) instead of her full name.

According to Azzam’s email, the first order was placed in September. The email states that the purchases comprise of 130 pieces of furniture. A Daily Mail report estimated their worth at around $440,000.

There was also a special order of linen for two bedrooms, a guest room, a living room and a dinning room in the ground floor as well as the dressing room. The first lady received several emails with pictures of the purchased items.

The total amount of Syrian emails intercepted by WikiLeaks since mid-2006 till last March has so far reached 2,435,899.

The emails are written in different languages of which 400,000 are in Arabic and 68,000 in Persian. WikiLeaks started publishing them on installments, the last of which focused o the online purchases.

The leaked emails contain personal information, pictures, and videos that president Bashar al-Assad exchanged with his wife and aides.

Many of those emails reveal Asmaa al-Assad’s obsession with shopping especially online where she can hide her identity. Alia Kayali was one of the names she used to buy jewelry, hand made furniture, and shoes.