Israeli man sets himself on fire at rally in Tel-Aviv 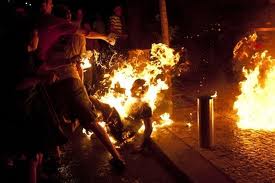 A protest in Tel-Aviv on Saturday night took an unsettling turn when an Israeli man set himself on fire. “The state of Israel stole from me and robbed me. It left me helpless,” 57-year-old Moshe Silman wrote in letters left at the scene before dousing himself with gasoline.

As Silman fights for his life with third-degree burns covering at least 80% of his body, protest leaders, politicians and the public are trying to understand the act of desperation and its meaning for the calls for “social justice,” the slogan of the socioeconomic protests now into their second summer in Israel.

Silman’s fall began with failure to repay a small debt that ballooned and cast him into poverty, exasperating dealings with bureaucracy and ultimately, despair. “I shall not become homeless,” he wrote, accusing the government of humiliating and weakening its citizens, “taking from the poor and giving to the rich.” Demonstrators read his letter out loud after the incident.

Prime Minister Benjamin Netanyahu extended wishes for Silman’s recovery and instructed Housing and Welfare ministers to examine his case, which he called “a great personal tragedy.”

Leaders of the protest — which began last summer as a call for affordable housing and quickly evolved into a movement protesting the high cost of living in Israel — reject personalizing Silman’s case. This was “an extreme act of a person broken by the cruelty of the system,” said Daphni Leef, a young film-school graduate and a movement founder.

Economic insecurity coupled with the collapse of the country’s welfare services causes citizens’ “fear of falling into poverty, hunger and living in the street,” she told reporters after the rally, adding that “the government that does not care for its citizens” is responsible. Saying she did not want to see more “victims of the government’s policy,” Leef said the lesson is that the protest needs “to achieve results and fast … because more and more people are losing what they have.”

Silman’s act echoes the self-immolation of Mohammed Bouazizi, the young Tunisian man who set himself on fire in December 2010, sparking revolt in his country that led to the removal of President Zine el Abidine Ben Ali and triggered the Arab Spring.

“Will Bouazizi’s Israeli equivalent inspire the government to do some soul-searching? Will he inspire some kind of rehabilitation for the system that pushed him to this terrible act?” asked commentator Or Kashti. He noted that the Tunisian man who had become a symbol did not kill himself to bring democracy but out of desperation after local municipal authorities confiscated his fruit stand and he lost his livelihood.

Opposition leader Shelly Yachimovitch said that increasingly strict criteria for public housing and the absence of a safety net for citizens brought Silman and others “to a dead end of despair.” But the Labor Party leader, a veteran advocate of equal and accessible socioeconomic rights, warned on her website that Silman’s attempted suicide “must not be seen as the symbol of the social protest.”

In 2005, a woman set herself on fire in protest of Israel’s plan to uproot settlements and “disengage” from the Gaza Strip. Yelena Bosinova died 10 days later but did not become a symbol of the campaign against the disengagement plan.

Saturday night’s rallies in Tel-Aviv and other cities marked a year since the formation of the social justice movement, dubbed the “J14” protest. Although participation is down from last summer’s demonstrations, which had 1 million people in the streets at their peak, protests have revived in recent weeks with many activists claiming nothing has changed.

Although Netanyahu’s promise that changes in taxation, increasing competition and changing economic priorities would eventually “lead to Israelis being able to … do more with their money” isn’t yet being felt in people’s pockets, it’s been “[a] good year for the social protest,” the editorial opined. They haven’t achieved everything they wanted, the liberal daily Haaretz editorialized, but the movement caused a genuine change in public awareness and “changed the balance of power between the public and the government.”

Others have warned of backlash, saying the country’s economy should brace itself for “capitalist protest,” in which politicians’ intervention in the economy will drive investors away and Israeli money out and take a toll on Israeli economy. Certain sectors are already hurting, most notably advertising and advertising-dependent media, as mega-companies branded as “tycoons” are keeping a lower public profile. The Tel-Aviv Stock Exchange also showed a decline this past year.