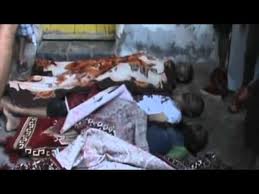 Reports of a massacre in a Syrian village stoked international pressure on and widespread outrage toward the besieged Bashar al-Assad regime Friday.

The latest mass killing in the crisis occurred in the village of Tremseh late Thursday, an incident that left more than 200 people dead, opposition groups said.

“I am shocked and appalled by news coming out of the village of Tremseh, near Hama, of intense fighting, significant casualties, and the confirmed use of heavy weaponry such as artillery, tanks and helicopters,” international envoy Kofi Annan said in a statement Friday.

Annan also called the news a “violation of the government’s undertaking to cease the use of heavy weapons in population centers and its commitment to the six-point plan.”

The Security Council must insist that there will be “consequences for non-compliance” of its resolutions that reference his six-point peace plan, Annan said. He said the council must insist on the “implementation of its decisions.”

“This is imperative and could not be more urgent in light of unfolding events,” he said. “Tragically, we now have another grim reminder that the Council’s resolutions continue to be flouted.”

The United States and Britain also underscored the need for tough action in light of the Tremseh deaths. The opposition Local Coordination Committees of Syria said 220 people died there.

The overall death toll for Syria on Thursday — estimated at 287 — could make it the bloodiest day in Syria since the uprising against the government started 16 months ago, the LCC said.

Activists in the city of Hama gave a grisly account of the assault.

Witnesses inside Tremseh told the activists by telephone that Syrian military forces had launched a full-scale attack against the opposition Free Syrian Army inside the town, which was surrounded by government tanks and artillery.

The forces had shelled the town continuously from 5 a.m. until noon, when their tanks entered the village, three activists told CNN separately. None of them was willing to be identified publicly.

Syrian army forces, whose numbers were bolstered by the pro-regime militias called Shabiha, accompanied the tanks into Tremseh, they said.

As the government forces rained artillery rounds into the town, a number of village residents fled their houses, going into the streets, where many of them were shot dead by the government militias, the activists told CNN in separate telephone interviews.

The Syrian Human Rights League, based in Cairo, said electric power and communications were cut in Tremseh during what it calls a “siege” that started with shelling and artillery fire and was followed by bloody raids, arrests, and house burnings. It said many of the victims were civilians, including women and children knifed, torched and drowned.

There have been other reports of mass killings in Syria, such as the killings of dozens in the city of Houla in May. The league said the Tremseh incident was the latest “massacre.”

The LCC also called the Tremseh incident a “massacre” and said “a heinous criminal act was added to the regime’s track record of horrors.”

The group said the “regime has also drawn a line of sectarian demarcation to leave Syrians terrorized from one another.” That’s a reference to sectarian strife between, for example, Sunnis, the predominant religious group in Syria, and Alawites, the offshoot of Shiite Islam that dominates the government.

Rafif Jouejati, an LCC spokeswoman, said she considers recent high-profile sectarian-related incidents to be “isolated” and not reflective of most Syrian attitudes. She and other opposition figures blame the regime for attempting to sow ethnic and religious divisions.

“The reality is the peaceful movement continues to thrive despite the regime’s best attempts,” she said.

The government painted a different picture of Tremseh.

In a report in state media, Syria blamed “armed terrorist groups” for the violence. It said the government said residents called security forces for help after the terrorist groups raided the neighborhood.

Regime forces arrested some of the members of the terror groups and confiscated their weapons, the government said.

A military source quoted by the state-run Syrian Arab News Agency said an operation by armed forces destroyed “terrorists’ dens,” killed many of the people they found there, and led to the arrests of scores more.

“Large amounts of weapons and documents, including IDs for non-Syrian persons, one of them Turkish, were seized,” the report said.

“Armed forces successfully dealt with the terrorists without casualties taking place among the citizens. They searched into the terrorists’ dens where they found the dead bodies of a number of citizens who had been abducted and killed by the terrorist groups.” 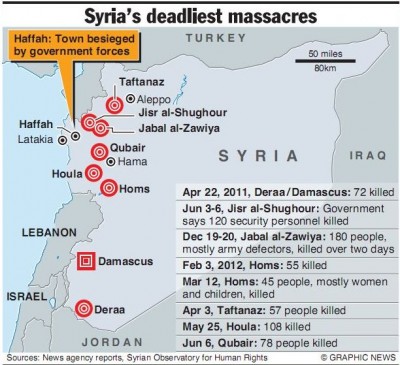 Syrian protesters say Annan, the special envoy to Syria for the United Nations and the Arab League, has been ineffectual and say the Tremseh incident reflects this. They want him removed from his special envoy role and are demanding tougher world action against al-Assad’s regime.

Annan brokered a six-point peace plan for Syria in April, but opposition fighters and regime forces have largely shunned its mandates, including a call to lay down their weapons.

On the main Facebook page for the uprising, opposition leaders accused Annan of failing to stop the killing of civilians. And protesters took to the streets on Friday, demanding his removal and marching in solidarity with the victims of Tremseh, a village more than 21 miles (34 kilometers) northwest of the city of Hama.

“We had some hope about the Annan mission, and that hope died with the new massacre in Tremseh,” said Ahmed, an activist from Homs who did not provide a full name for safety reasons. “And what is Annan going to do?”

Abdulbaset Sieda, chairman of the Syrian National Council, said on Friday the Annan plan has proven to be a failure and a “thing of the past.”

The unrest in Syria continued Friday. At least 66 people have been killed, the LCC said.

CNN cannot independently verify reports from Syria because the nation has restricted access by international journalists.

Al-Assad’s bloody crackdown on civilians has sparked international condemnation, but the support of allies such as Russia and China has protected the Syrian regime and hindered a resolution by the United Nations.

Russia and China, which are permanent U.N. Security Council members, have vetoed draft resolutions that would have condemned the Syrian regime.

The council on Thursday discussed dueling draft resolutions on Syria. Ambassadors remain at odds over whether a Western-backed resolution should invoke a U.N. charter provision mandating sanctions and ultimately leading to an authorization to use force.

The Tremseh incident underscored talk of such a resolution, decried by Russian officials, according to state-run RIA Novosti.

“Using the resolution to justify the use of force in the future is absolutely unacceptable to us,” Deputy Foreign Minister Gennady Gatilov said.

British Foreign Secretary William Hague said, “We will redouble our efforts” to win agreement on “a Chapter VII Resolution of the United Nations Security Council.”

“This would compel the Syrian regime to fulfill the commitments it has made under the Annan Plan, to withdraw its military from residential areas, and establish a transitional government as called for by Kofi Annan and endorsed by the P5 and Arab League,” he said. P5 refers to the five permanent member of the Security Council.

“It should be a legally binding Security Council Resolution with teeth, that creates a trigger for sanctions if the Assad regime does not comply,” Hague said.