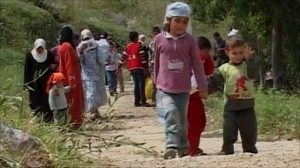 Beirut- Lebanon’s relief agency has suspended funding treatment for wounded Syrians who cross into the country, officials said on Thursday, citing rapidly rising costs as the conflict over the border escalates.

Local aid and medical workers said Lebanese hospitals would close their doors to wounded Syrians who were not in a critical condition. They have yet to determine where the wounded would be taken instead or who would pay for them.

The United Nations Higher Council for Refugees (UNHCR) says some 30,000 Syrians have fled to Lebanon to flee the fighting in the 16-month-old revolt against President Bashar al-Assad.

The head of Lebanon’s Higher Relief Council (HRC), Ibrahim Bashir, said the cost of providing medical care for Syrians had ballooned to over $1 million a month from around $200,000 a few months ago.

Activists said the decision would endanger Syrians wounded in the conflict, who are smuggled into neighbouring countries such as Lebanon and Turkey for fear of retribution or arrest if they go to state hospitals in Syria.

“How is this the fault of a Syrian whose arm has been cut off, or whose leg is bleeding? If they don’t take our wounded we’ll take them out into the streets and protest,” said Syrian activist Khaled Abu Raed, who heads a relief group for Syrian refugees in Lebanon’s northern port city of Tripoli.

The HRC and overseeing minister Wael Abu Faour, of the Ministry of Social Affairs, said costs being were inflated by Syrians seeking secondary care such as cancer and diabetes treatment.

“Treatment will be suspended until a new system can be put in place to prevent exploitation,” Abu Faour said. “There are some people who claim they are displaced but they are not, and there is bad administration.”

The director of Lebanon’s government hospital in Tripoli said life-or-death cases would not be ignored.

“If it is very, very serious, we would have to accept the case and figure out how to pay for it later,” said Nasir Adra.

“This is a political decision by the Lebanese government,” he said. “Syria is in a state of war, who will help us? In cases of war, neighbouring countries always help the wounded.”

Lebanon, which is still recovering from its bloody 1975-1990 civil war, has been wary of getting dragged into Syria’s conflict. Tensions have been high between pro- and anti-Assad groups and have sometimes sparked deadly clashes.

HRC head Bashir said the decision was purely financial. “The economic situation is very difficult,” he said. “When the costs reach $1 million a month, it becomes painful for us.”

He said the group would resume healthcare once a new budget and new standards for treatment could be agreed by the government. But the issue could be mired in dispute at parliament, where the past sessions have been boycotted or dismissed over political squabbles.

The UNHCR and other relief agencies would try to pay for treating emergency cases, said spokeswoman Dana Sleiman, but that without more funding, they would have trouble covering costs for the growing number of Syrians in Lebanon.

“In addition to providing shelter, education and other things, our current budget constraints do not allow us to cover more,” she said. “We’re really hoping the situation gets resolved somehow.”