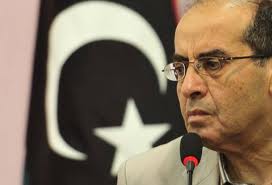 The National Forces Alliance, a collection of about 60 political groups led by Mahmoud Jibril, was ahead of the Muslim Brotherhood’s Justice and Construction party, according to results released by the election commission at a press conference in Tripoli yesterday.

The Brotherhood’s party took second place in all three multi-seat regions where results were declared, with the Alliance winning two. Jibril’s grouping beat the Justice and Construction party by 26,798 votes to 2,423 in Janzour, a suburb of Tripoli, and by 19,200 to 5,626 in Zlitan. A third party won in Misrata. A final tally for a 200-seat national assembly will be given tomorrow.

Libyans went to the polls on July 7 in their first free national election in more than 40 years amid political violence that’s hampered efforts to rebuild after last year’s uprising caused Qaddafi’s overthrow and death. Libyan Islamist groups sought to emulate the success of their counterparts in Tunisia and Egypt, a trend which culminated in the election of the Muslim Brotherhood-backed Mohamed Mursi as Egypt’s president last month.

Preliminary returns from Benghazi, the country’s second- biggest city, showed Jibril’s Alliance taking more than 50 percent of the vote, according to the Libya Herald online newspaper, which cited unnamed elections officials. Libya’s political parties are competing for 80 seats, while individual candidates vie for the other 120.

“This is great news for the country and the Libyans,” said Osama Gandour, a student at Tripoli University. “He is the right man to lead us.”

Jibril, who earned a PhD from the University of Pittsburgh in 1985 and subsequently taught strategic planning at the institution, became head of national planning under Qaddafi in 2007 and worked with his son Saif al-Islam on a new constitution. He joined the opposition last year, becoming de facto prime minister and helped direct North Atlantic Treaty Organization action that crushed Qaddafi’s armed forces. He describes his alliance as pro-business.

The grouping stands at the political center, though it is not politically liberal. “Some media channels started referring to the National Forces Alliance as liberals — that’s not true,” he said on July 8. The Alliance is “composed of different political formations.”

The newly elected assembly will pick a Cabinet to replace the ruling Transitional National Council, which has struggled to restore order and revive the economy.

Ahead of the election results, Jibril said he favored the creation of a coalition.

Abdurrahman Sewehli, leader of the Union for Homeland party, which came in first in the coastal city of Misrata, yesterday ruled out working with Jibril, saying he had been too close to the previous government.

“Misrata is the only place in Libya where Jibril is getting nothing,” he said in a telephone interview. “Symbolism is very important. Mr. Jibril is still representing the old regime. He was very close to Qaddafi.”

Voter turnout among the 2.8 million registered voters was 60 percent, Al Jazeera television reported on July 8, citing Nouri Al-Abbar, the head of the country’s election commission. They were choosing between about 142 parties and about 3,700 candidates.

The pre-election period was marked by the eastern region’s push for a measure of autonomy and the transitional council’s failure to wrest power from regional militias that spearheaded the NATO-backed uprising. Fighting among the armed groups this year has undermined security and discouraged local businesses. Protests delayed elections in some towns and shut-off oil exports.