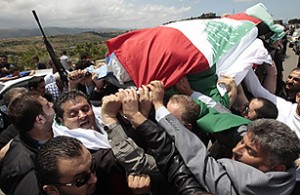 The cabinet on Tuesday met and decided to refer the case of the killing of the prominent Sunni anti-Syrian Sheikh Ahmad Abdel Wahed and his bodyguard to the Judicial Council, according to Information Minister Walid al-Daouq.

“The cabinet voices its respect for the citizens’ [desire] that justice be served without lenience, and [decided] to refer the case of the killing of Sheikh Abdel Wahed and Sheikh Mohammad Merheb to the Judicial Council… and expand the investigation,” Daouq said following the cabinet session.

Last May, army troops shot Abdel Wahed and his bodyguard, Sheikh Mohammad Hussein Merheb, dead when their convoy allegedly failed to stop at a checkpoint in North Lebanon, the scene of deadly clashes linked to the uprising in Syria.

A delegation of Akkar MPs met on Monday with President Michel Suleiman at the Baabda palace and asked him to refer the case of the killing of the Sunni cleric and his bodyguard to the Judicial Council . They had threatened civil disobedience, including sit-ins near the Grand Serail and Prime Minister Najib Mikati’s residence, if no action is taken in this regard.

Akkar MP Khaled Daher described the Cabinet’s decisions yesterday to deploy the Lebanese army at the border with Syria as positive. He added “But we prefer that the case be referred to the Justice Council.”

Daher also said that deploying the Army on the northern border with Syria has been demanded by the people and MPs of Akkar and is a national duty.

Commenting on the release of 11 of the 16 army suspects in the killing of the cleric President Michel Suleiman told the cabinet on Monday that the officers and soldiers were released on bail because the period of their precautionary detention had expired before the release of the indictment.

The president said that the Army personnel could be summoned again to continue investigation, adding that the Cabinet should decide whether to refer the case to the Judicial Council.