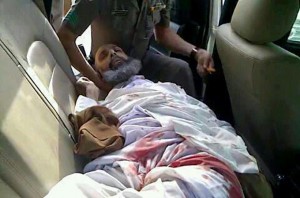 Saudi Arabia said on Monday that two men had been killed after protests in a Shi’ite Muslim area in the eastern part of the world’s top oil exporter, following the arrest of a prominent Shi’ite cleric.

A key U.S. ally, Saudi Arabia has largely escaped the kind of protests that have toppled four heads of state since last year, but the mostly Shi’ite Qatif region of the Eastern Province has been the focal point of sporadic demonstrations alleging discrimination.

A statement from an Interior Ministry spokesman said the deaths followed a protest in the village of Awamiya over the arrest of Sheikh Nimr al-Nimr, but said there was no clash between protesters and police.

“Security authorities had been notified by a nearby medical centre on the arrival of four individuals brought in by their relatives,” Major General Mansour Turki, the spokesman, said in a comment sent to Reuters.

“Two of them were dead, the other two were slightly injured. Competent authorities initiated investigations in the incident.”

Shi’ite activists and websites had also reported that at least two men had been killed in the protests. The Rasid website named the men as Akbar al-Shakhouri and Mohamed al-Felfel.

“In the aftermath of the arrest … a limited number of people have assembled in the town of Awamiya,” the Interior Ministry statement said. “Gun shots have been overheard in random areas of the town. However, there was no security confrontation whatsoever.”

Nimr, seen as a leading radical cleric, was hurt in an accident as security forces chased his car, the Interior Ministry said on Sunday, adding that he was accused of “sedition”.

Activists from the Eastern Province, where most of Saudi Arabia’s Shi’ites live, posted pictures on the Internet of a grey-bearded man they identified as Nimr inside a vehicle.

He was covered with what appeared to be a blood-stained white blanket.

Shi’ites say they struggle to get government jobs or university places, that their neighbourhoods suffer under-investment, and that their places of worship are often closed down. The government denies charges of discrimination.

photo: Activists posted what they said was a leaked image of Sheikh Nimr al-Nimr after he was arrested and injured