Annan to hold talks with Assad 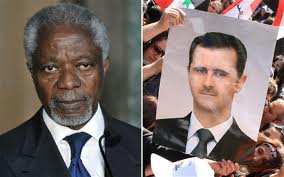 The UN and Arab League’s envoy to Syria, Kofi Annan, is due to meet President Bashar al-Assad in Damascus for talks on his six-point peace plan.

The meeting comes after Mr Annan acknowledged that the plan has so far failed to end the violence.

A week ago, a meeting of major powers called for a transitional unity government in Syria.

Mr Assad has accused the US of trying to destabilise Syria by giving “gangs” in his country political protection.

Syria’s Foreign Ministry spokesman, Jihad Makdissi, told the AFP news agency that the talks would focus on the six-point plan for peace mediated by Mr Annan earlier this year.

In an interview published on Saturday, Kofi Annan told the French paper Le Monde that the plan for Syria had so far “failed” to end the bloodshed.

A day earlier, he recommended in a report to the UN Security Council that the UN mission that is meant to be monitoring the truce in Syria should instead focus on political mediation.

The BBC’s Jim Muir, in neighbouring Lebanon, says that after efforts to pave the way for a political dialogue by ending the violence failed, the emphasis is now on trying to achieving a political solution first.

But Mr Annan faces an uphill task in trying to break the vicious circle of blame and recrimination between the regime and its opponents, our correspondent adds.

Syrian opposition groups demand that Mr Assad and close allies of his should be excluded from any transition government, but the president insists he will not step down.

In a TV interview broadcast on Sunday, President Assad said Mr Annan’s six-point plan was “very good”, but was being undermined by certain countries, including the US.

“The biggest obstacle is that many countries do not even want this plan to succeed so they offer political support and continue to provide the terrorists in Syria with arms and money,” Mr Assad told German broadcaster ARD.

He said Saudi Arabia and Qatar were supplying the “terrorists” in his country with arms, while Turkey was giving them logistical support.

Mr Assad also said he believed that the majority of Syrians support him.

His remarks came as Syria’s armed forces conducted “large-scale” manoeuvres to test their “combat readiness” against “any possible aggression”, according to the state news agency Sana.

“Our navy forces started to conduct an operational tactical manoeuvre with live ammunition, during which naval and coastal rockets were fired,” the report added.

Tensions along the border with Turkey have been raised after Syria shot down a Turkish fighter jet last month.

Some in the Syrian opposition have called for foreign military intervention to unseat Mr Assad’s government.

Also last week, Turkey said it had begun deploying rocket launchers and anti-aircraft guns along the border in response to the downing of its F-4 Phantom jet on 22 June.

Syria said the Turkish F-4 was shot down by air defence fire inside its airspace.

Meanwhile, violence continued in Syria on Sunday, with 11 people reported dead, according to the Local Co-ordination Committees (LCC), a network of activists inside Syria.

Over 15,000 people are thought to have been killed since the start of the anti-government uprising more than a year ago.