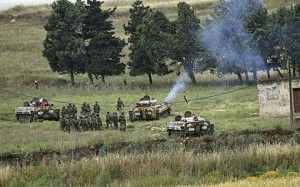 One Lebanese was killed and five others were wounded in  the border town of Wadi Khaled as a result of overnight shelling from the Syrian side of the border,  National News Agency reported.

“Syrian artillery shelled a number of houses in Wadi Khaled in North Lebanon from around 1:15 am until 3 am, killing Nadia al-Ouishi, 19 years old, and injuring Ahmad and Mustafa al-Makhal, both children, in [the town’s] Al-Mahatta neighborhood,” the NNA added.

It also said that local resident Berri Chehade’s house was struck, injuring two of his daughters, while a child, identified as Abir Ali al-Makhal was also injured.

According to the report, Ouishi and the five injured people were transferred to a hospital in Qoubbayat.

Many residents fled the areas which “were targeted by the Syrian shelling,” the NNA said, adding that calm prevailed at around 5 a.m.

Since the outbreak of protests in Syria in March 2011, the Lebanese-Syrian border has seen a number of shootings and incursions from the Syrian side.

The United Nations estimates that about 22,000 Syrians have fled violence in their homeland to seek refuge in Lebanon, but the actual number is reportedly over 60,000