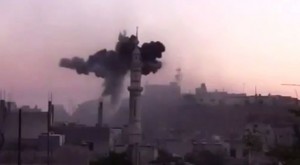 The violence in Syria has reached unprecedented levels, the head of the country’s U.N. observer mission said Thursday, insisting there must be a cease-fire in order for his teams to resume their work.

About 300 U.N. monitors were sent to Syria to provide an unbiased look at the violence, but they have been confined to their hotels since June 15 because of the bloodshed.

“The escalation of violence, allow me to say, to an unprecedented level, obstructed our ability to observe, verify, report as well as assist in local dialogue,” Norwegian Maj. Gen. Robert Mood told reporters in the Syrian capital Damascus.

More than 14,000 people have been killed since the Syrian uprising began in March 2011, according to activists. As the conflict grinds on, the violence has become widespread and chaotic. Besides the government crackdown on dissent, rebel fighters are launching increasingly deadly attacks on regime targets, and several massive suicide attacks this year suggest al-Qaida or other extremists are joining the fray.

Syria severely restricts the media in the country, making it difficult to gain a credible account of events on the ground.

The president of Cyprus said the island nation has drawn up contingency plans to receive a possible influx of evacuees from Syria if necessary.

Dimitris Christofias said his country is ready to act as an evacuee way station as it did in 2006 when it offered shelter and food to tens of thousands of people who fled Lebanon during a monthlong war between Israel and Hezbollah.

More than 200,000 Syrians have so far fled the country overland, seeking refuge in Jordan, Lebanon and Turkey.