Egypt’s new president faces a test on violence against women

by yalibnan
737
By: Trudy Rubin With the election of the first Islamist president in Egypt's history, the Muslim Brotherhood's Mohammed Morsi, violence against women has become a hot issue.
Share: 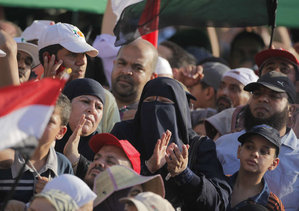 With the election of the first Islamist president in Egypt’s history, the Muslim Brotherhood’s Mohammed Morsi, violence against women has become a hot issue.

True, there have been troubling attacks on female activists since the revolution began in January 2011. Who can forget the infamous photo of a female demonstrator stripped to the waist, her blue bra exposed, as one soldier stomps on her stomach while two others drag her along on the street?

But many women fear that, as Islamists jockey with the military for power, these kinds of incidents will multiply. Egyptian media have reported several nasty episodes in the last week, including stories of women being harassed or assaulted because they were unveiled or “immodest.”

So, this week, Egyptian human-rights organizations and some opposition parties demanded that Morsi take urgent measures to prevent more violence toward women. “The reason these organizations acted,” says Heba Morayef, a researcher in Human Rights Watch’s Cairo office, “is because they are concerned about what the Brotherhood’s positions are going to be.”

How Morsi responds will provide an important signal to Egyptians, and the world, about what kind of system the Islamists want.

Assaults against female demonstrators were occurring long before the Muslim Brotherhood and the hard-line Salafis’ Nour Party won 70 percent of seats in parliament. In one of the most notorious incidents, in March, a group of female protesters were sexually harassed by security forces, then were arrested and compelled to submit to virginity tests.

These “tests” involved a doctor inspecting the females in the presence of gawking security men. It seems that top military officials were as sexist as any radical Salafi: When some of the women complained, the military’s judicial chief accused them of seeking the limelight and defaming the armed forces.

Samira Ibrahim, the only victim brave enough to bring a court case against the military and the participating doctor, has received a stream of telephoned death threats and been fired from her workplace. The doctor was acquitted in court.

Many Egyptian women argue that violence against females is a product of a broader culture that devalues them. Not a single Arab country ranks in the top 100 in the World Economic Forum’s Global Gender Gap Report, which rates countries on their level of women’s political empowerment, along with women’s economic participation and opportunity, education, health, and survival. In the 2011 global rankings by region, the Middle East finished last.

Yet for many Egyptian working women, the recent election of an Islamist president is particularly unsettling. They know that Islamist members of parliament elected last fall have pushed to roll back the rights of women, including the right to divorce. They fear the Brotherhood will press for changes inimical to women in a new constitution, whose drafting process it has tried to control.

And many women fret that they may face new, Islamist-generated social pressure on dress codes on the street or in the workplace. “There is a lot of panic in Egypt at the moment,” Morayef told me in a phone interview.

In this atmosphere, each new episode of violence adds to the nervousness, even if there is no sign that the attacks are coordinated. For example, at a massive Muslim Brotherhood rally Friday in Tahrir Square, a hard-line Salafi preacher who is a close ally of President Morsi reportedly shoved two female photographers and screamed at them to leave the area.

And on Sunday, in Suez, a student was stabbed to death by bearded men who objected to his walking with his fiancee in public. Yes, the men might have been provocateurs. But they could just as easily have been religious radicals emboldened by the rise of an Islamist president.

So Morsi’s stance on women in his first 100 days will be an important sign of his intentions. One bad omen will be if he disbands the National Council for Women, an activist organization that reports to the president, and replaces it with a council on the family. Such a shift would confirm that, rather than promoting the rights of individual women, the Brotherhood prefers that women stay in the home.

It will mean little if Morsi keeps his pledge to appoint a female vice president if she is given no real powers. This would confirm that the Brotherhood, whose female members are relegated to the background, regards women in politics as subservient to men.

But there is something Morsi could do in the near term if he wants to allay the fears of seculars, moderate Muslims, and Christians, male as well as female. He could make clear that he, and the Brotherhood, will not tolerate violence toward women in public or in private.

Such a stand would send a clear message to religious radicals: If they harass women, they will be arrested and punished. It would also counter the image of the Islamists as tolerant of domestic violence.

The chances that Morsi will make these moves are slim. Yet his legitimacy is shaky, given that tens of millions of Egyptians voted against him and he’s also under pressure from the military; he needs the support of civil society. So this is the moment for Egyptian civil groups to press him to stand up against assaults on women – and it is heartening to see them do so.

Egypt is not Saudi Arabia – yet.