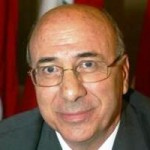 “There may be some groups that want chaos [to spread] in Lebanon but the cabinet’s decision to control the security situation is serious and it will be strictly implemented,” Qortbawi said

Qortbawi also said that everyone had the right to express their opinions, adding however that this did not include blocking roads and inciting tension. A possible reference to the Salafist Sunni cleric led sit-in in the south Lebanon port city of Sidon demanding the disarmament of Hezbollah.

Supporters of Sheikh Ahmed Assir had on Wednesday night blocked the highway at Sidon’s northern entrance and prevented cars from passing according to local reports.

Commenting on the attack against Al-Jadeed in late June Qortbawi said that Wissam Alaeddine, one of the men who attacked the station, will be dealt with according to judicial data, adding that he will not allow any political pressures to affect the case.

Last week, masked Hezbollah and Amal movement men attacked the headquarters of Al-Jadeed in the Beirut area of Wata al-Msaytbeh and burned tires on the TV station’s property. Alaeddine , who was detained by PSP supporters as he was fleeing the scene after his pants caught fire reportedly confessed to the involvement of Hezbollah and Amal supporters in the Al Jadeed attack.

Hezbollah and Amal supporters were reportedly outraged following the Al Jadeed Sunday interview with Sheikh Assir, who criticised Hezbollah chief Hassan Nasrallah and renewed his support for the “Syrian revolution.”