800 killed in past week: Syrian opposition 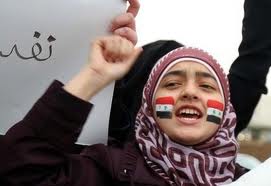 Syria’s main opposition group said nearly 800 people have been killed in violence across the country in the past week which saw some of the bloodiest violence in the 16-month uprising against President Bashar Assad.

Opposition activists groups say more than 14,000 people have been killed in the 15-month-old uprising against President Bashar Assad’s authoritarian rule, or on average of about 900 a month. That would make last week’s toll alone, tallied by the Syrian National Council (SNC), almost as high as the monthly average.

The conflict is also threatening to spill across borders after Syria shot down a warplane from neighboring Turkey, which responded by setting up anti-aircraft guns along the frontier. Turkey said Sunday it scrambled fighter jets to its border after Syrian helicopters flew too close to the frontier.

The cross-border tensions and the mounting death toll have added urgency to the diplomatic efforts at an international conference over the weekend aimed at stopping the bloodshed.

The conference in Geneva on Saturday accepted U.N.-brokered plan calling for creation of a transitional national unity government in Syria. But at Russia’s insistence, the compromise agreement left the door open to Assad being part of the interim administration. It could also include members of Assad’s government and the opposition and other groups. It would oversee the drafting of a new constitution and elections.

The U.S. backed away from insisting that the plan should explicitly bar Assad from any role in a new government, hoping the concession would encourage Russia to put greater pressure on its longtime ally to end the violent crackdown on dissent.

U.S. Secretary of State Hillary Clinton insisted on Saturday that Assad would still have to go.

It is now “incumbent on Russia and China to show Assad the writing on the wall” and help force his departure,” she said. “There is a credible alternative to the Assad regime,” she said. “What we have done here is to strip away the fiction that he and those with blood on their hands can stay in power.”

It is now “incumbent on Russia and China to show Assad the writing on the wall” and help force his departure,” she said. “There is a credible alternative to the Assad regime,” she said. “What we have done here is to strip away the fiction that he and those with blood on their hands can stay in power.”

Syrian opposition groups rejected the U.N.-brokered plan. The SNC criticized it as too ambiguous, underlining the seemingly intractable nature of the conflict. The opposition called it a waste of time and vowed as they always do not to negotiate with Assad or members of his “murderous” regime.

“Every day I ask myself, do they not see how the Syrian people are being slaughtered?” veteran Syrian opposition figure Haitham Maleh asked. “It is a catastrophe. The country has been destroyed and they want us then to sit with the killer?”

Maleh described the agreement reached in Geneva as a waste of time and of “no value on the ground.”

“The Syrian people are the ones who will decide the battle on the ground, not those sitting in Geneva or New York or anywhere else,” he said by telephone from Cairo, where opposition groups are to meet Monday.

There was no reaction from the regime to the plan, but Assad has repeatedly said his government has a responsibility to eliminate terrorists — his term for those fighting the regime — and will not accept any non-Syrian model of governance.

Fayez Sayegh, a prominent lawmaker and member of the ruling Baath party, expressed satisfaction at the outcome of the conference, saying participants left it up to the Syrian people to decide their fate and form of governance.

“The conference … did not discuss matters that have to do with the president as Western countries would have wished,” Sayegh told The Associated Press.

Bassma Kodmani, a Paris-based spokeswoman for the opposition SNC, said the agreement is “ambiguous” and lacks a mechanism or timetable for implementation.

Kodmani said there were some positive elements in the plan, which implies that all members of the Security Council were in agreement that the transition period must not be led by Assad. But added that this needs to be more explicitly, she said.

“We cannot say that there is any positive outcome today,” she said. “The Syrians will not accept engaging in any political track while the killing continues.”

The U.N. plan was brokered by special envoy for Syria Kofi Annan, who in March submitted a six-point peace plan that he said the Assad regime accepted. It led to the April 12 ceasefire that failed to hold. U.N. observers sent to monitor the ceasefire suspended their patrols in Syria on June 16 due to a spike in violence and have been confined to their hotels since.

Moscow had refused to back a provision that would call for Assad to step aside, insisting that outsiders cannot order a political solution for Syria and accusing the West of ignoring the darker side of the Syrian opposition. The opposition has made clear it would not take part in a government in which Assad still held power.

Russian Foreign Minister Sergey Lavrov underlined that the plan does not require Assad’s ouster, saying there is “no attempt in the document to impose on the Syrian people any type of transitional process.”

In the latest episode, activists said dozens of people were killed and wounded in a powerful explosion Saturday evening that hit a funeral procession in a suburb of the Syrian capital Damascus. Details of the blast in Zamalka remain murky, but amateur videos showed gruesome images of bodies, some with their limbs torn, lying on the ground as people walked about dazed in a cloud of smoke.

The British-based Syrian Observatory for Human Rights said more than 30 people were killed, while the Local Coordination Committees activist network said it had documented the names of 40 of the dead and that residents were unable to identify an unknown number of remaining bodies.

Activists blamed government forces for the explosion, which they said was likely the result of a car bomb detonated near a mosque where the funeral of an activist killed earlier by regime gunmen was being held.

The SNC did not explain how it arrived at the death toll of 800 for the past week. But it said in a statement that most of the dead were killed in indiscriminate tank and helicopter shelling by regime forces on residential areas throughout Syria.

Death tolls are virtually impossible to verify in tightly-controlled Syria, which imposes severe restrictions on journalists.

But Khalil Al Haj Saleh, a member of the Local Coordination Committees activist network, said the 800 figure appears to be “realistic” in light of the past week’s carnage.

The LCC and the Britain-based Syrian Observatory for Human Rights have reported an average of around 100 Syrians killed in the past week.

Turkey scrambled its jets days after it said it would treat any Syrian military unit approaching its border as a direct threat in response to the downing of a Turkish reconnaissance plane by Syrian forces on June 22. Turkey has also reinforced its border with anti-aircraft guns and other weapons.

The military said the helicopters flew as close as 4 miles (6.5 kilometers) to the Turkish border.