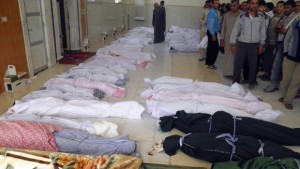 More than half of the over 14,000 people killed since the Syrian began 16 months ago were slaughtered in the past four months, according to tallies from opposition activists.

June was a particularly gruesome month, with 2,386 people killed compared to 1,196 in May, the Local Coordination Committees of Syria said.

The bloodshed continued Sunday, when five people were killed in Hama province “in another massacre committed by regime forces,” the LCC said. In addition, three bodies were found in Idlib province, the group said.

A day after world diplomats agreed on a new plan to help end the violence, the LCC slammed the efforts and dismissed them as superficial.

“The new agreement provides vague language which is open to interpretation,” the opposition network said in a statement Sunday. “This provides yet another opportunity for the regime’s thugs to play their favorite game in utilizing time in order to stop the popular Syrian Revolution and extinguish it with violence and massacres across Syria.”

U.N.-Arab League special envoy Kofi Annan invited diplomats from the U.N. Security Council and envoys from Turkey, the United Nations, the European Union and the Arab League to the global meeting in Geneva on Saturday.

Those at the meeting agreed that the first step should be a renewed commitment to a cease-fire by both the regime and opposition fighters, as well as the implementation of Annan’s six-point peace plan without waiting for the actions of others, Annan said.

But a key to the process will be a transitional government, which Annan said could include members of the current Syrian regime. That makes it possible for President Bashar al-Assad to be a part of the transition, but Annan pointed out it is the Syrians who will decide the make-up.

“I think people who have blood on their hands are hopefully not the only people in Syria,” Annan said. “I think the government will have to be formed through discussion, negotiations, and by mutual consent. And I will doubt that the Syrians — who have fought so hard for their independence, to be able to say how they’re governed and who governs them — will select people with blood on their hands to lead them.”

But the LCC said it was “gravely concerned” by what could happen in a transitional period with President Bashar al-Assad’s military and security forces.

There are “core conflicts between the Revolutionaries and Bashar al-Assad’s pillars and symbols, whose hands are stained with blood and must be excluded from the transitional phase,” the opposition group said. “No Syrian will accept a regime waiver of responsibility over crimes and violations against human rights.”

“Assad will still have to go. He will never pass the mutual consent test, given the blood on his hands,” she said.

The agreement in Geneva also calls on the Syrian government to release detainees and allow journalists access to the country. The right to peaceful demonstrations must be respected, Annan said.

Clinton said the U.N. Security Council should endorse the plan, thus allowing the possibility of sanctions against Syria if the requirements aren’t met.

Russia, widely viewed as a key ally to the Syrian regime, said the agreement should not be interpreted as outside powers imposing a transitional government on the Syrians. That process must come from inside Syria, Russian Foreign Minister Sergey Lavrov.

As diplomats plotted their next strategy Saturday, a large funeral procession made its way through a Damascus suburb, clapping and chanting loud slogans against the government.

The man they were burying was wrapped in a Syrian revolutionary flag and had allegedly been killed by government forces. The crowd waved additional flags and shouted for freedom.

Then there was a deafening explosion.

In what opposition activists say was a government-organized car bombing, 85 people were killed and more than 300 people were wounded, most of them in critical condition.

Activists posted videos to YouTube purportedly showing the moment of the bombing in Zamalka and its aftermath.

After the loud crack and orange flash of the explosion come moaning and screams of “Allahu Akbar” (“God is great”) from every direction. As the brown dust clears, the carnage becomes visible: charred bodies, missing limbs and pools of blood.

The flag-wrapped body of the funeral victim was lying on the ground.

The security forces even fired on the crowd in the bombing’s aftermath, killing a doctor who was trying to help the wounded, said an opposition activists named Bassem, who asked that his last name not be used.

The 85 slain in Zamalka were among 174 people killed across the country Saturday, the LCC said.