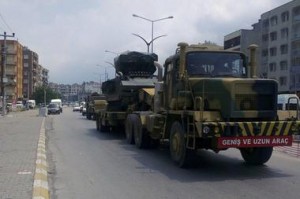 Turkish troops and anti-aircraft batteries were headed toward the tense Turkish-Syrian border region Thursday amid reports that U.N. special envoy Kofi Annan was calling for a transitional “national unity” government as a potential solution to the crisis in Syria.

The Turkish deployment appeared moderate in scale and seemed more defensive — and perhaps symbolic — than offensive in nature.

On the diplomatic front, published reports have indicated that a new “road map” from Annan envisions a transitional government in Syria that would include representatives of the opposition and possibly some members of the current government.

However, the plan would reportedly exclude anyone whose presence could “undermine” the transition — wording that many interpret as aimed at President Bashar Assad.

However, Russian Foreign Minister Sergei Lavrov cautioned that any reported additions to the Annan peace plan had not been finalized or agreed upon by all parties.

“There are no approved projects; the work on the possible final document is in progress,” Lavrov said at a news conference in Moscow.

Russia and the United States are among the nations expected to attend an emergency meeting Saturday of Annan’s so-called Action Group for Syria.

The session is a last-ditch effort to salvage Annan’s six-point peace plan, widely violated by both sides. Its centerpiece was a cease-fire that never took hold. Violence has escalated in recent weeks in Syria, where Assad’s forces have been battling an uprising for more than 15 months.

“You have to have a transition that complies with international standards on human rights, accountable governance, the rule of law, equal opportunity for all people of Syria, and this framework lays out how to arrive at that,” Clinton told reporters Thursday during a visit to Riga, Latvia.

U.S. officials appear set to argue that Assad’s continued presence in Syria would not fit into the proposed framework. Clinton and Lavrov are scheduled to meet Friday in St. Petersburg and discuss the issue.

A major question of any transition blueprint is the fate of Assad, who has been digging in and warning the nation that it is now on a war footing.

Washington and its allies say Assad must step down. But Russia and China so far have refused to go along with any international plan calling for his ouster.

The raging conflict in Syria has reverberated into Turkey, which shares a 500-mile border with the nation.

Turkish media reported that a convoy of about 30 military vehicles, including trucks with missile launchers, was being deployed Thursday along the border in southern Hatay province.

Turkish officials have stressed that they want to avoid a military confrontation with Syria, but they were enraged last week when Syrian forces shot down a Turkish military jet off Syria’s coast. Turkish Prime Minister Recep Tayyip Erdogan has said border security would be bolstered and that any Syrian military units approaching Turkey would be regarded as a threat.

The Turkish military buildup, and the increasingly tense relations between the neighbors, raises the possibility of a border clash. The Turkish frontier zone has become a haven for Syrian rebels and is also home to tens of thousands of Syrian refugees who have fled the violence.

The border has also become a conduit for fighters and weapons heading into Syria. Turkey denies reports that it has provided arms to the rebels or facilitated delivery of weapons from third parties, such as wealthy, pro-rebellion Syrians and the Persian Gulf Arab nations of Saudi Arabia and Qatar, both of which have publicly backed the idea of arming the rebels.

Syria has seen a number of car bombings in recent months, mostly targeting government or security installations, with dozens of civilians killed in the attacks. The government has blamed “terrorists,” its label for antigovernment forces.

Rebels seeking to oust Assad have vowed to take the battle to the capital, and fierce clashes have been reported in recent days in its restive suburbs.

On Wednesday, gunmen stormed a pro-government television station outside Damascus, ransacked the offices and studios, set off explosives and killed three journalists and several other employees, state-run media reported. Press organizations worldwide and the White House condemned the attack.