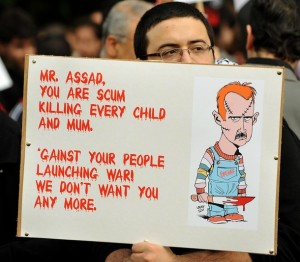 Russia heads to tomorrow’s Geneva meeting on UN envoy Kofi Annan’s plan for a handover of power in Syria amid conflicting accounts about its willingness to cut ties to President Bashar al-Assad.

Foreign Minister Sergei Lavrov said yesterday that there is no agreement yet on Assad’s fate. Leaks to the press suggesting otherwise were an “unscrupulous approach to diplomacy,” he told reporters in Moscow.

Persuading Assad to step aside and not be part of a transitional government paving the way for elections is at the core of Annan’s plan to be discussed at the foreign ministers’ meeting. The outlook for action may depend on whether, as some diplomats said on condition of anonymity, Russia is prepared to break with its long-time ally Assad.

“The Russians do not like to have deals they are cutting in private to be exposed in public” before what they view is the right time, said Jeff Laurenti, a UN analyst at the Century Foundation in New York, in a telephone interview. “They are very concerned that their so-called partners on the other side may be leaking it to force their hands to do more than what they have signaled they were ready to do.”

The Annan document says the interim government may include members of Assad’s government and opposition and other groups, although it “would exclude from government those whose continued presence and participation would undermine the transition and jeopardize stability and reconciliation.”

“The conflict must be resolved through peaceful dialogue and negotiation alone,” the document says. “Conditions conducive to a political settlement must now be put in place.”

The document, obtained today by Bloomberg News, was cited earlier on a blog by Nabil Abi Saab of Alhurra TV.

All of the conference invitees, including Russia, signed off on the contents of the paper, according to three UN officials who asked not to be identified because the talks are being conducted in private.

Russia denied such an understanding. It has made a different proposal and won’t support any imposed power handover, according to a Russian Foreign Ministry official, who also asked not to be identified discussing confidential talks.

The latest effort to end the 16-month battle between the Alawite-dominated government and a largely Sunni Muslim uprising comes as Assad said his country is in a state of war.

Scheduled to attend the Geneva conference are the foreign ministers of the five permanent UN Security Council members — China, France, Russia, the U.K., and the U.S. — as well as Qatar, Kuwait and Iraq.

U.S. Secretary of State Hillary Clinton said countries attending the meeting on Syria were doing so on the basis of the plan proposed by Annan.

Clinton said during a visit to Latvia yesterday that it was clear from the invitations to the conference that “people were coming on the basis of the transition plan.” She will discuss the issue with Lavrov today in St. Petersburg.

“A pre-agreed project doesn’t exist,” Lavrov said yesterday at a news conference with Tunisian Foreign Minister Rafik Abdessalem in Moscow. “The work on the document continues.”

“In order to overcome the Syrian crisis and to finally establish stable rights and norms which satisfy all groups in the Syrian population, it is necessary to have a transitional period, this is obvious,” Lavrov said.

While Russians will stick to their public statements that foreign powers can’t impose regime change, there has been a shift in private, according to two UN diplomats speaking on condition of anonymity. They said Russia is keen to engineer a soft landing to raise its standing in the region by acting as a peace broker.

“Russians have seen the outcome of just letting Assad handle this the old-fashioned way and the facts on the ground speak for themselves,” Laurenti said. They have come to a realization “he won’t be able to ride it out,” he said.

Russia has become too entrenched in the Syrian conflict to suddenly make a U-turn and embrace a full regime change, Lilit Gevorgyan, a London-based analyst at IHS Global Insight, said in an e-mail.

Because of its prominent role as a power broker in the crisis, Russia will push for a Yemen-style change that will seek to preserve the backbone of Assad’s government and even involve the Syrian president’s departure provided that he is not brought to trial, he said.

Assad’s government is fighting a growing insurrection in which more than 10,000 people have died, according to UN estimates. Two bombs exploded at an open parking lot near a court complex in the Syrian capital, Damascus, wounding at least three people, state television reported yesterday.

Tensions have also risen with neighboring Turkey, a member of the North Atlantic Treaty Organization, after Syria shot down a Turkish warplane, which it said violated its territory and Turkey said was in international airspace, on June 22.

Turkish Prime Minister Recep Tayyip Erdogan said this week that Turkey had changed its military rules of engagement after the incident and that any military element approaching the Turkish border from Syria could be viewed as a threat and treated as a military target.