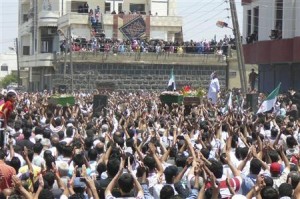 Turkish commanders inspected the missile batteries deployed on the border region on Thursday following Syria’s shooting down of a Turkish warplane a week ago, which has sharply raised tensions between the two nations.

The Turkish deployments, a graphic warning to President Bashar al-Assad, coincide with rising violence across Syria and increasingly urgent international efforts to forge a peace deal as the nation slips into full-blown war.

As the Turkish-Syrian dimension ratcheted up further pressure, peace envoy Kofi Annan said on Friday he was “optimistic” that crisis talks in Geneva on Saturday would produce an acceptable outcome, which has so far proved elusive.

Regional analysts said that while neither Turkey nor its NATO allies appeared to have any appetite to enforce a formal no-fly zone over Syrian territory, Prime Minister Tayyip Erdogan had made it clear Assad would be risking what he called the ‘wrath’ of Turkey if its aircraft strayed close to its borders.

Recently, there were clashes close to the border between Syrian forces and rebels. Last weekend, Damascus said “terrorists” infiltrating from Turkey were killed and there have been reports of Syrian forces shooting into camps for refugees in Turkey.

The United States, Britain and France have said that Assad is responsible for the violence, which the United Nations estimates has killed at least 10,000 people, and is no longer fit to govern. Russia and China, however, reject what they describe as Western calls for “regime change”.

Turkey, sheltering some 34,000 Syrian refugees and providing bases for the rebel Free Syria Army (FSA), is in the forefront of the efforts to bring down Assad.

The British-based Syrian Observatory for Human Rights said 190 people, including 125 civilians, were killed on Thursday.

General Mustafa al-Sheikh, head of the Higher Military Council, a grouping of senior officers who defected from Assad’s forces, said around 170 Syrian tanks had assembled at an infantry school near the village of Musalmieh northeast of the city of Aleppo, just 30 kilometers (19 miles) from the Turkish border.

“They’re either preparing to move to the border to counter the Turkish deployment or attack the rebellious (Syrian) towns and villages in and around the border zone north of Aleppo,” Sheikh told Reuters by telephone from the border.

Omar Abdallah, an activist in Idlib coordinating with the Free Syrian Army said: “After taking hits in rural Aleppo and Idlib, the army is re-grouping … There is speculation that these forces intend to ring Aleppo starting July 1.”

Rebel sources in Turkey’s Hatay region said Assad’s helicopters attacked Saraqeb, a strategic town deep in Idlib province, but kept away from the area directly along the Turkish border in the rural regions of Idlib and Aleppo provinces.

Neither Turkey, which fears a local clash escalating into a regional sectarian conflagration, nor Syria, has any interest in a confrontation on their shared border.

Ankara, which has the second biggest army in NATO, called an emergency NATO meeting after its warplane was shot down.

Turkey has in the past talked about creating a humanitarian corridor on Syrian territory if refugee flows became dangerously unmanageable or the scale of killing in Syria became intolerable. But it had always said this would require international endorsement.

“NATO just doesn’t look like it’s in the mood,” David Hartwell, Middle East analyst, IHS Jane’s, said. “What you might get is the Turks forcing a de facto no-fly zone.”

Erdogan announced earlier this week that he had issued new rules of engagement to his border troops and said any Syrian military elements approaching Turkish borders and deemed a threat would be treated as a target. But he failed, perhaps deliberately, to specify how close Syrian forces could come to the border before becoming vulnerable.

Rebels sources said they saw two Syrian attack helicopters on Friday flying about 4 km from the Turkish border in Idlib province and landing at an army base at Bab al-Hawa, close to Reyhanli, one of the places where Turkey has stationed anti-aircraft defenses.

It was the first time aircraft had been spotted close to the border and appeared to test Turkey’s new rules of engagement.

“The Syrians might accept a very narrow zone along the border. Syria will remain very reluctant to get involved in any conflict with Turkey. They would be up against a very serious military foe,” Malcolm Chalmers, research director at Britain’s Royal United Services Institute, said.

The world has been accused by Syrian opposition activists of inertia over the bloodshed. Diplomacy has failed to produce agreement between Western powers, backing the opposition, and Russia, which has used its U.N. veto to block Western and Sunni Arab moves to drive Assad from power.

Ahead of Saturday’s meeting, Russia proposed changes to Annan’s plan for a national unity government in Syria, despite initially supporting it, but the United States, Britain and France rejected the amendments, Western diplomats said.

Russia and the other permanent U.N. Security Council members told Annan this week they supported a transitional cabinet that could include government and opposition members but would “exclude … those whose continued presence and participation would undermine the credibility of the transition and jeopardize stability and reconciliation,” according to Annan’s proposal.

Although Russia signaled to Annan this week that his plan was acceptable, Russian Foreign Minister Sergei Lavrov reversed course on Thursday, diplomats said. Diplomats said the Russians demanded that Annan remove from his proposal the language about excluding people from a Syrian national unity government.

U.S. Secretary of State Hillary Clinton and Lavrov were due to hold talks on Friday in St. Petersburg that could be decisive in breaking the impasse. The pair are scheduled to attend the Geneva talks on Saturday.

Annan had made preliminary acceptance of his guidelines for a political transition for Syria a condition for organizing Saturday’s meeting in Geneva. The meeting is to include the United States, Britain, France, Russia, China, Turkey, Iraq, Kuwait and Qatar. Iran and Saudi Arabia were not invited.

“I think we are going to have a good meeting tomorrow(Saturday). I am optimistic,” Annan told Reuters Television.

Assad on Thursday dismissed the notion of any outside solution to the 16-month-old uprising against his rule.

“We will not accept any non-Syrian, non-national model, whether it comes from big countries or friendly countries. No one knows how to solve Syria’s problems as well as we do.”

Photo: Residents carry the coffins of people whom protesters say were killed by shelling by forces loyal to Syria’s President Bashar al-Assad, during a funeral in Dael, near Deraa, June 28, 2012. REUTERS/Shaam News Network/Handout