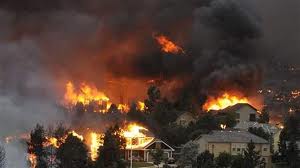 COLORADO SPRINGS, Colo. – Fire crews fought to save the U.S. Air Force Academy and residents begged for information on the fate of their homes Wednesday after a night of terror sent thousands of people fleeing a raging Colorado Springs wildfire.

More than 30,000 have been displaced by the fire, including thousands who frantically packed up belongings Tuesday night after it barreled into neighborhoods in the foothills west and north of Colorado’s second-largest city. With flames looming overhead, they clogged roads shrouded in smoke and flying embers, their fear punctuated by explosions of bright orange flame that signaled yet another house had been claimed.

A team of Denver firefighters called in to help battle the Waldo Canyon fire told CBS affiliate KCNC an estimated 300 homes have burned to the ground.

“The sky was red, the wind was blowing really fast and there were embers falling from the sky,” said Simone Covey, a 26-year-old mother of three who fled an apartment near Garden of the Gods park and was staying at a shelter. “I didn’t really have time to think about it. I was just trying to keep my kids calm.”

Wilma Juachon sat under a tree at an evacuation center, wearing a mask to block the smoke. A tourist from California, she was evacuated from a fire near Rocky Mountain National Park last week and, now, from her Colorado Springs hotel.

“I said I hope it never happens again, and guess what?” Juachon said.

Some 3,000 more people were evacuated to the west of the fire, Teller County authorities said Wednesday, and Teller County courts were closed through Thursday.

Meanwhile, the White House said President Barack Obama will tour fire-stricken areas of Colorado on Friday and thank firefighters battling some of the worst fires to hit the American West in decades.

The full scope of the fire remained unknown. So intense were the flames and so thick the smoke that rescue workers weren’t able to tell residents which structures were destroyed and which ones were still standing. Steve Cox, a spokesman for Mayor Steve Bach, reported that at least dozens of homes had been consumed.

Indeed, authorities were too busy Wednesday struggling to save homes in near-zero visibility to count how many had been destroyed in what is the latest test for a drought-parched and tinder-dry state. Crews also were battling a deadly and destructive wildfire in northern Colorado and another that flared Tuesday night near Boulder.

Carey said officials had no plans to release the numbers of homes destroyed — insisting residents have a right to be told first, in private.