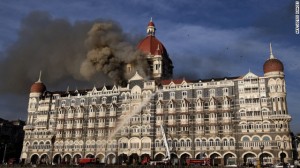 A key suspect in the 2008 Mumbai terror attacks that killed more than 160 people has been apprehended, Indian authorities said Tuesday.

“He was a key conspirator, who abetted the attack and carried out the planning,” according to Nikam, who did not say when the arrest was made.

Investigators believe Jundal was on the phone coordinating the attack from Pakistan as 10 gunmen staged the bloody three-day siege throughout India’s commercial capital.

“He was there in the terror control room,” Nikam said. “His voice was intercepted here.”

While New Delhi police refused Tuesday to comment on the arrest, the Mumbai court handling the case has issued a warrant asking that Jundal appear before it.

Indian forces killed nine of the 10 gunmen and later put the lone survivor on trial.

In May 2010, Mohammed Ajmal Kasab, a Pakistani who was photographed holding an assault weapon during the siege, was convicted of murder, conspiracy and waging war on India.

Two Indian nationals accused of conspiracy in the case — Fahim Ansari and Sabauddin Ahmed — were acquitted by the court in Mumbai.

More than 160 people were killed in November 2008, as the 10 men attacked Mumbai buildings including the Taj Mahal Palace and Tower and Oberoi-Trident hotels, the city’s historic Victoria Terminus train station, and the Jewish cultural center, Chabad House.

India blamed the attacks on the Lashkar-e-Tayyiba, a Pakistan-based terror group allied with al Qaeda.

Authorities said Kasab was trained by the organization, which was banned in Pakistan in 2002 after an attack on India’s parliament.

The development derailed a fragile peace process between the nuclear-armed neighbors for about 15 months.

Under American pressure, the two arch-rivals resumed their full spectrum of dialogue last year in their bid to build trust.

The news of Jundal’s arrest comes ahead of next month’s meeting in New Delhi between Indian and Pakistani foreign secretaries.

Pakistani diplomats said they will continue to cooperate with India on such matters.

“Pakistan has been in the forefront in the campaign against terror,” a statement from the Pakistani high commission in New Delhi said. “As agreed at the highest level between Pakistan and India, terrorism is a common concern and counter-terrorism cooperation is in the mutual interest of both countries.”

Photo taken on November 27, 2008, as Indian firefighters try to put out a fire at the historic Taj Mahal Hotel in Mumbai, one of the sites of 2008 attacks.