Putin arriving in Israel for talks on Iran, Syria 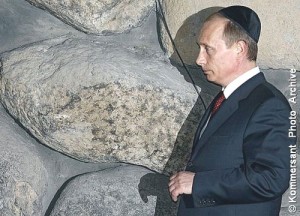 According to Haaretz newspaper Russian President Vladimir Putin is expected to arrive Monday morning on a state visit to Israel.

Putin will head a large entourage comprised of government ministers, advisers and journalists. The 300-person delegation will arrive in four planes.

Israeli officials are hoping to recruit Russia’s government to join their efforts against Iran’s nuclear program. They also want to encourage a number of security and economic initiatives.

Israeli Foreign Minister Avigdor Lieberman is expected to greet the Russian contingent this morning at Ben-Gurion Airport. The visitors will head straight to Netanya, where Putin will dedicate a monument memorializing Red Army soldiers, an initiative sponsored jointly by him and Prime Minister Benjamin Netanyahu. The Russian leader is expected to receive a warm welcome there.

The focus of the Netanyahu- Putin talks is expected to be on Iran and Syria, where the two countries have wide differences of opinion.