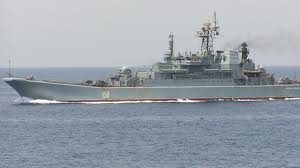 Moscow: Amid the ongoing turmoil in Syria, Russia is deploying two warships to the port of Tartus on the Mediterranean coast , a report says.

Moscow is preparing to send two amphibious assault ships to the port city, according to a Russian Interfax news agency report on Monday.

Interfax quoted an officer from the Russian naval headquarters as saying, “Two major amphibious ships — The Nikolai Filchenkov and The Tsezar Kunikov — are preparing to be dispatched to Tartus outside of their schedule.” The report did not mention the name of the officer.

The two warships will carry a “large” group of marines, the report said.

However, the Russian Defense Ministry has not yet confirmed the report.

The development comes two days after sources in Washington said the United States was planning military “intervention” in Syria and that the issue is not a question of “if” but “when.”

In addition, a White House official said on June 16, “At this critical juncture, we are consulting with our international partners regarding next steps toward a Syrian-led political transition.”

However, Russia and China, two permanent members of the UN Security Council, have repeatedly opposed the use of force in Syria.

Chinese President Hu Jintao and his Russian counterpart Vladimir Putin said in a joint statement issued in Beijing on June 6, “We firmly believe that the Syrian crisis has to be resolved fairly and peacefully by having all parties in conflict stop violence and start comprehensive political dialogue without foreign interference.”

Meanwhile, the head of UN observer mission in Syria, Major General Robert Mood, said on June 16 that the monitoring team was “suspending its activities” in the country due to an “intensification of armed violence.”

Russia operates a strategic naval base in Tartus.