Obama to permit young illegal migrants to remain in U.S. 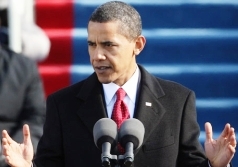 Hundreds of thousands of illegal immigrants who came to the United States as children will be allowed to remain in the country without fear of deportation and able to work, under an executive action the Obama administration announced on Friday.

Administration officials said the president used existing legal authority to make the broad policy change, which could temporarily benefit more than 800,000 young people. He did not consult with Congress, where Republicans have generally opposed measures to benefit illegal immigrants.

The policy, while not granting any permanent legal status, clears the way for young illegal immigrants to come out of the shadows, work legally and obtain driver’s licenses and many other documents they have lacked.

“They are Americans in their heart, in their minds, in every single way but one: on paper,” President Obama said in announcing the new policy in the White House Rose Garden on Friday. He said he was taking “a temporary stopgap measure” that would “lift the shadow of deportation from these young people” and make immigration policy “more fair, more efficient and more just.”

Under the change, the Department of Homeland Security will no longer initiate the deportation of illegal immigrants who came to the United States before age 16, have lived here for at least five years, and are in school, are high school graduates or are military veterans in good standing. The immigrants must also be under 30 and have clean criminal records.

Young people, who have been highly visible and vocal activists despite their undocumented status, have been calling on Mr. Obama for more than a year to stop deporting them and allow them to work. Many of them were elated and relieved on Friday.

“People are just breaking down and crying for joy when they find out what the president did,” said Lorella Praeli, a leader of the United We Dream Network, the largest coalition of illegal immigrant students.

Republicans reacted angrily, saying the president had overstepped his legal bounds to do an end run around Congress. Some Republicans accused Mr. Obama of violating the law. “The president’s action is an affront to the process of representative government by circumventing Congress and with a directive he may not have the authority to execute,” said Senator Charles E. Grassley of Iowa, the senior Republican on the Senate Judiciary Committee. “It seems the president has put election-year politics above responsible policies.”

In many ways, the president’s move was a clear play for a crucial voting bloc in states that will decide whether he gets another term. It also held the potential for considerable payoff.

The action was the first measure by Mr. Obama that offers immediate relief to large numbers of illegal immigrants, in contrast to smaller steps the administration had taken that were intended to ease the impact of deportations but in practice had little effect. During the three years of his term, Mr. Obama has deported more than 1.1 million immigrants, the most by any president since the 1950s.

“Now let’s be clear: this is not an amnesty,” Mr. Obama said in the Rose Garden, anticipating the Republican response. “This is not a path to citizenship. It is not a permanent fix.”

The group of illegal immigrants that will benefit from the policy is similar to those who would have been eligible to become legal permanent residents under the Dream Act, legislation that Mr. Obama has long supported. An effort by the White House to pass the bill in late 2010 was blocked by Republicans in the Senate. Mr. Obama called on Congress again Friday to pass that legislation.

The president was facing growing pressure from Latino leaders and Democrats who warned that because of his harsh immigration enforcement, his support was lagging among Latinos who could be crucial voters in his race for re-election.

Illegal immigrants said the new policy would make a major difference in their lives. As students, when they graduate from high school, they often cannot go on to college because they are not eligible for financial aid and must pay higher tuition rates. If they do succeed in graduating from college, regardless of their academic accomplishments, they cannot be legally employed in the United States or obtain driver’s or professional licenses.

The Pew Hispanic Center, a nonpartisan research group in Washington, estimated on Friday that as many as 1.4 million immigrants might be eligible for the new measure. The vast majority are Latinos, with about 70 percent born in Mexico. Many of the students live in states that could be pivotal for Mr. Obama’s re-election prospects, including Colorado, Florida, Nevada and New Mexico.

Nationally, a Pew Center survey in December found that 91 percent of Latinos supported the Dream Act.

For immigrants who come forward and qualify, Homeland Security authorities will use prosecutorial discretion to grant deferred action, a reprieve that will be valid for two years and will have to be renewed. Under current law, that status allows immigrants to apply for work permits.

In a memorandum issued Friday referring to the students, Homeland Security Secretary Janet Napolitano instructed all enforcement agents to “immediately exercise their discretion, on an individual basis, in order to prevent low-priority individuals from being placed into removal proceedings.”

But Homeland Security officials said they would begin accepting requests from immigrant students in 60 days, leaving time to prepare procedures to handle the huge response they expect.

Representative Steve King, Republican of Iowa, who is an outspoken critic of illegal immigrants, said he would bring a lawsuit against the White House to stop the measure.

White House officials said they chose Friday for the policy shift because it is the 30th anniversary of a Supreme Court decision, Plyler v. Doe, that effectively established that all children, regardless of immigration status, were entitled to public education through high school.

Immigrant student leaders praised Mr. Obama, saying his action should convince other students that advocacy could be effective, even for immigrants without legal status. Although the reprieve is temporary, the leaders said they expected that the majority of students would seize the opportunity to work and come out into the open.

“We’ve done away with the fear,” said Gaby Pacheco, 27, an Ecuadorean-born immigrant who was among the first in a wave of students in recent years who “came out” to declare publicly that they were in this country illegally.

Mr. Obama also received praise from Democratic lawmakers, including the Hispanic Caucus in the House and Richard J. Durbin of Illinois, the second-highest Democrat in the Senate who is the leading author of the Dream Act. Mr. Durbin first proposed in April 2010 that the president should grant deferred action to young students.

Over the past two months Mr. Durbin and other top Democrats, including Senator Harry Reid of Nevada, the majority leader, have quietly urged Mr. Obama to do something significant to help immigrant students.

Maricela Aguilar, 21, who was born in Mexico and lives in Wisconsin, said she was in Los Angeles with a group of students when the news came of the new policy.

“We were all watching and listening and screaming out in joy,” she said. Ms. Aguilar graduated last month from Marquette University, but feared she would never find work professionally.

Some students were cautious, recalling that Mr. Obama had promised them help before. “We don’t want to get too excited,” said Daniela Alulema, 25, an illegal immigrant from Ecuador who is a leader of the New York State Youth Leadership Council. “We hope that what was announced will be implemented and will actually help our community.”