UN chief demands access to the besieged city of Haffeh 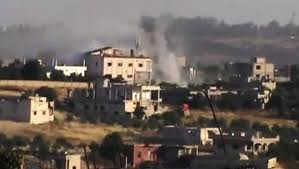 United Nations Secretary General Ban Ki-moon is demanding Syrian authorities grant the U.N. “unimpeded access” to the besieged Syrian city of Haffeh, ( Haffa) where civilians are said to be trapped.

U.N. monitors report Syrian forces are using helicopters to attack the rebel-held city and that civilians are caught in the crossfire.

Mr. Ban’s office said Monday that he expressed deep concern over the “dangerous intensification” of the fighting in Syria over the past few days, and called for the bloodshed and fighting to stop at once.

U.N. and Arab League envoy Kofi Annan says he is “gravely concerned” about the violence in Haffeh and Homs where rebels have been attacked by artillery, helicopters, tanks and mortars. Monday was the first time the U.N. said it could verify activists’ reports that Syrian military helicopters were attacking the rebels.

U.S. State Department spokeswoman Victoria Nuland said officials are deeply alarmed about reports from inside Syria that the government may be planning another massacre of civilians in at least six places.

“Syrian forces have already escalated their oppression in direct defiance of their commitments to the Annan plan by using now new, horrific tactics, including the firing on civilians from the air by helicopters. Added to the use of irregular forces, the shabiha, this constitutes a very serious escalation,” she said.

Violence across the country Monday claimed more than 60 lives, according to activists’ reports, but it has been impossible to confirm the toll independently. There are reports of an aerial assault by government forces targeting the strategic river city of Rastan, which has resisted government offensives for months.