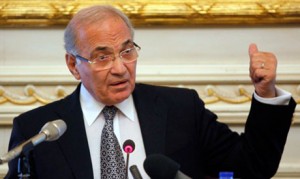 In the small southern Egyptian town of Azaziya, where almost all the residents are Christians, few doubt that nearly everyone who can is going to vote for Ahmed Shafiq, ousted leader Hosni Mubarak’s last prime minister and his longtime friend, in this weekend’s presidential election.

Shafiq’s candidacy has dismayed many Egyptians who believe the Mubarak-era veteran will preserve the old regime’s authoritarianism. But even if some Christians share those reservations, they view his opponent in the race as far worse: Mohammed Morsi, of the Muslim Brotherhood, which Egypt’s Christian minority fears will turn the country into an Islamic state.

“Our goal is a civil state. We don’t see anyone else who can protect this except for him,” Montaser Qalbek, the son of Azaziya’s town leader, said of Shafiq.

In last month’s first round of the presidential election, which narrowed the field from 13 candidates to two, Shafiq received nearly all of the 4,500 votes cast in Azaziya, a town in the southern province of Assiut. Qalbek said he expects more than twice that number to turn out for the Saturday-Sunday run-off and that they will again overwhelmingly back Shafiq.

That determination is likely to be mirrored across the Christian community, which makes up 10 percent of Egypt’s population of 85 million. Many Christians see the vote as a clear-cut choice between a secular state and one in which an Islamist agenda slowly takes root. Leaders of the Orthodox Coptic Church, to which most Egyptian Christians belong, and Christian activists have been working hard to get the community to the polls, said Yousef Sidhom, editor of the weekly Watani newspaper and a Coptic Church official.

While they have been cautious not to use the pulpit, priests and influential congregants have been expressing support for Shafiq at church-related activities, Sidhom and other Christians said.

Those Christians who vote will back Shafiq because they are fearful of the Brotherhood’s “hidden agenda,” Sidhom said.

“There is a Brotherhood strategy to work toward building an Islamic country.”

Sidhom says there are concerns the Brotherhood will keep Christians out of some government positions, tax non-Muslims, base education around Islam and create a foreign policy that favors Muslim over non-Muslim nations.

The Brotherhood has long insisted it won’t discriminate against Christians. In his run-off campaign, Morsi has vowed Christians will have full rights equal to Muslims’ and said he might appoint a Christian as one of his vice presidents.

“We don’t believe this,” said Sidhom. “They just want to lure people to vote for Morsi.”

The campaign has already turned bitter, reflecting what could be a close race. Morsi and Shafiq each won about a quarter of the vote in the first round, with Morsi coming out ahead by a hair.

Morsi has sought to appeal to moderate and secular Muslims by drumming up fears of a continued Mubarak-style, military-backed police state if Shafiq wins.

Shafiq, a former military man like Mubarak, is stoking fear of the Brotherhood. “The Brotherhood represents darkness and secrecy,” he said at his first press conference after first round results were announced . “They don’t want to take us 30 years back, but all the way back to the dark ages.”

The message resonates with Christians. They are already feeling insecure with the recent death of their leader, Pope Shenouda III, on top of the post-Mubarak rise of Islamists and a lapse in security across the nation, which saw a rash of sectarian violence. In a gesture of solidarity, Brotherhood leaders attended Shenouda’s last Christmas service, in 2011, and in his sermon the pope said Copts and Islamists would work together for Egypt’s sake. But the event did little to reduce Christians’ mistrust of the group.

The region’s turmoil has deeply unsettled the Middle East’s Christians. Syria’s Christian minority, for example, has largely stuck by President Bashar Assad, fearing the strength of Muslim hard-liners in the uprising against his rule. For a worst-case scenario, Christians can look to Iraq, which many Christians have fled after their community and others were repeatedly targeted by extremist militants in the chaotic years after Saddam Hussein’s 2003 toppling.

Mubarak’s regime was hardly ideal in many Christians’ eyes. They complained

of discrimination and suffered sectarian violence, culminating in the bombing of a church in Alexandria that killed 21 people at a New Year’s Mass more than a year ago. Young Christians played an active role in last year’s 18-day uprising against Mubarak and in protests against the military generals who took Mubarak’s place in power.

Still, Mubarak was seen by many in the community as their protector against Islamists, and Shenouda strongly backed him.

Some of that strongman image seems to have rubbed off onto Shafiq. In the first round, there were other secular candidates, such as former foreign minister Amr Moussa and socialist candidate Hamdeen Sabahi, but they did not get the mass Christian support Shafiq did.

In Azaziya, Qalbek — once a member of Mubarak’s ruling party — said he urged fellow townspeople to back Shafiq because of his military background, which many believe makes him the generals’ preferred candidate and gives him the needed strength to blunt Islamists.

“Yes, there was injustice in the old regime,” said Qalbek. “But why should I turn to something new? What does something new hold for me?”

Support for the divisive Shafiq has caused a backlash. Christians complain that after the first round, they have been harassed in the streets and at work. Witnesses in Assiut say a Muslim baker refused to sell bread to Christians.

Revolution-minded Christians — and Muslims — who want neither an old regime figure nor the Brotherhood are left in a quandary.

Farid Edward, a 21-year-old activist, said he voted for Sabahi in the first round because “he represented a secular state and the revolution.” Now he is joining a growing movement to boycott the runoff.

“If I am thinking just about Christians, of course I will vote for Shafiq not Morsi. But if I am thinking also as an Egyptian and what is best for the country I won’t vote for either Shafiq or Morsi,” he said.

While the Coptic Church says it takes no official position on candidates, Edward says some local church leaders urged people to back Shafiq.

“I feel that not all the church officials have that revolutionary sense and understand us as youth,” he said.

The generational divide among Christians spilled over into the streets in October, when youth defied their leadership by protesting outside Maspero, the state TV building in Cairo, against attacks on churches. A violent military crackdown on the protest left 27 people dead.

Paul Sedra, an expert on Egypt and professor at Vancouver’s Simon Fraser University, said Copts feel more vulnerable now than they have in decades.

“We have a church basically without a leader, a community that suffered through the Maspero massacre … and the Muslim Brotherhood ascendant in the political realm,” he said. “This gave them a far greater feeling of instability and that gave Shafiq far greater votes.”

In the province of Assiut, home to a large Christian community and birthplace of Pope Shenouda, Qalbek predicts unanimous support for Shafiq.

“All the votes of Christians in the run-off will go to Shafiq. That is what the revolution wanted, a civil state based on democracy,” he said.