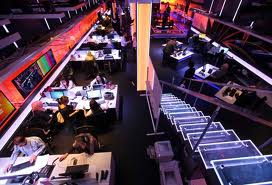 A new pan-Arab satellite television station went on air Monday, headed by a well-known Tunisian journalist who quit Al-Jazeera to protest what he saw as bias against Syrian President Bashar Assad’s regime.

The Beirut-based station Al-Mayadeen, Arabic for The Squares, says it aims to counter the influence of the popular Al-Jazeera and Al-Arabiya networks, both funded by oil-rich Sunni Gulf Arab countries that have backed the uprising in Lebanon’s neighbor Syria. It promises to support the Palestinian cause and all forms of “resistance” — a term in Mideast parlance usually used to describe the powerful Lebanese militant group Hezbollah and other groups that fight Israel.

Al-Mayadeen is headed by Ghassan bin Jiddo, who quit Qatar-based Al-Jazeera last year to protest its reporting of the uprising in Syria. Since the revolt began 15 months ago, some Arabs accused Al Jazeera of whipping up public opinion against Assad’s regime. The station hopes to capitalize on the schism in the Arab world between Gulf Arab countries led by Saudi Arabia and Qatar, who are at odds with Iran and Syria and have called for international military intervention to oust Assad.

“We are not a channel that speaks in the name of Iran or the Syrian regime. We are a completely independent channel which reflects reality as it is,” bin Jiddo said at a news conference in Beirut this week.

Still, he said the channel will champion Arab nationalist causes, at the foremost the Palestinians.

“We will fight sectarianism and stand against colonialism and foreign intervention. … The station’s compass will always be turned to Palestine and the resistance,” he said. Syria considers itself part of a “resistance” axis against Israel and the West, together with its allies Iran and the Lebanese Hezbollah group.

The new channel is competing with a slew of other all-news Arab TV stations trying to draw viewers at a time of momentous political change in the Arab world. The Arab Spring uprisings that have swept the region since last year have polarized the media, with journalists accusing each other of taking sides.

The station began broadcasting at 1100 GMT Monday (7 a.m. EDT) with a pledge from bin Jiddo to uphold a professional and balanced approach to journalism. In the run up to the launch, billboards advertising Al-Mayadeen popped up across Lebanon with the words: “Reality as it is.”

There has been much speculation over the source of funding for the channel, which employs around 300 workers. Some reports say it will be a mouthpiece for Iran and Hezbollah. Bin Jiddo has denied the charges, saying it is funded by Arab businessmen whose identity he would not disclose.

The channel has attracted journalists from across the Arab world and even beyond. George Galloway, an outspoken former British anti-war lawmaker, will host a weekly program called “A Free Word.”