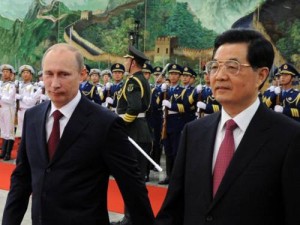 China said on Tuesday that both Beijing and Moscow oppose foreign intervention or forced regime change in Syria as Russian President Vladimir Putin arrived for a security summit.

China and Russia, both permanent members of the U.N. Security Council, have blocked efforts by Western powers to condemn or call for the removal of Syrian President Bashar al-Assad whose forces the United Nations says have killed more than 10,000 people since March last year.

Both countries have stayed in close touch on Syria and believe there should be an immediate end to violence, adding that political dialogue should begin as soon as possible, Chinese Foreign Ministry spokesman Liu Weimin told a daily news briefing.

“We believe ultimately the Syrian issue should be properly addressed through consultation among different parties in Syria. This is in the fundamental interests of the Syrian people. China and Russia have been playing, in their own way, a positive role on the Syrian issue.” 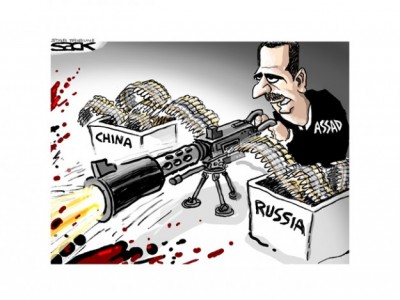 Russia and China, wary of any Western-led military intervention in Syria, say U.N. mediator Kofi Annan’s plan is the only way forward, but have twice blocked U.N. Security Council resolutions which would have condemned Damascus and perhaps led to sanctions.

Syrian rebels said on Monday they were no longer bound by a U.N.-backed truce because Assad had failed to observe their Friday deadline to implement the ceasefire and had only attacked government forces to defend “our people”.

Putin is attending a summit of the Shanghai Cooperation Organisation, which also includes former Soviet states in central Asia.

Among the talks between Russia, the world’s biggest energy producer, and China, the largest consumer of energy, will be a natural gas deal which Moscow hopes to finalise after years of negotiation.

Also on the table is a multi-billion dollar joint venture to build a long-haul aircraft, Russian media have said, and a state-run fund to invest in Russian and Chinese projects.

photo: Chinese President Hu Jintao and Russian President Vladimir Putin walk after reviewing an honour guard during a welcoming ceremony at the Great Hall of the People in Beijing  June 5, 2012. (Getty Images)